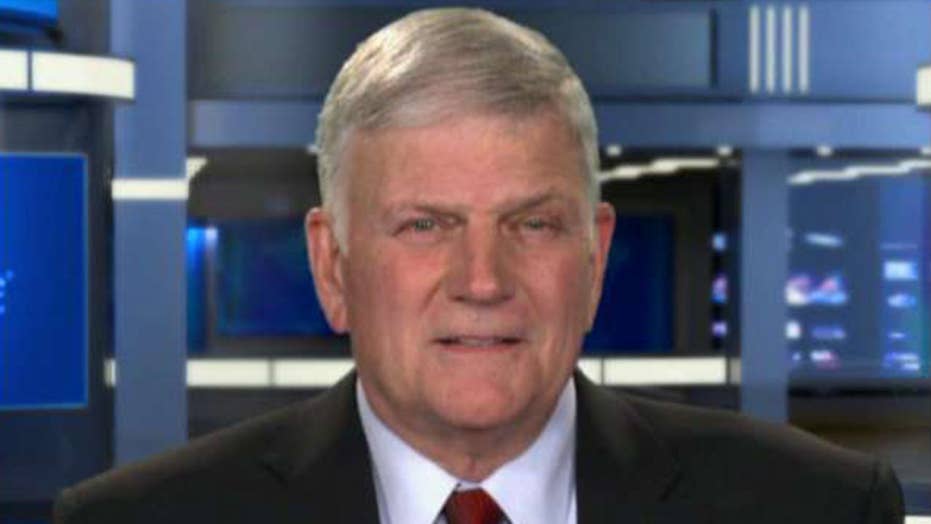 The late Rev. Billy Graham would have been "disappointed" that his name was invoked in Christianity Today's recent call for President Trump's removal from office, Graham's son told Fox News on Monday night in an exclusive interview.

"My father would be very disappointed and would not agree with it at all," the Rev. Franklin Graham said Monday on "The Ingraham Angle."

Graham, 67, an evangelist like his father -- and one of five children of the globally renowned religious leader and adviser to U.S. presidents who died at age 99 in 2018 -- was among nearly 200 evangelical leaders who condemned Christianity Today for publishing an anti-Trump editorial that the critics claimed “offensively questioned the spiritual integrity and Christian witness of tens of millions of believers who take seriously their civic and moral obligations."

The monthly magazine, with a circulation of about 130,000 readers, was founded by the late Rev. Graham in 1956.

In its editorial, titled "Trump Should Be Removed From Office," Christianity Today editor-in-chief Mark Galli invoked the mission of Billy Graham, to "help evangelical Christians interpret the news in a manner that reflects their faith."

"We want CT to be a place that welcomes Christians from across the political spectrum, and reminds everyone that politics is not the end and purpose of our being," Galli wrote. "That said, we do feel it necessary from time to time to make our own opinions on political matters clear — always, as Graham encouraged us, doing so with both conviction and love. We love and pray for our president, as we love and pray for leaders (as well as ordinary citizens) on both sides of the political aisle."

In response, the group of Christian leaders penned a letter to Timothy Dalrymple, the magazine's president, condemning the editorial, and criticizing Dalrymple for dismissing evangelicals who oppose its views as "far-right," the Christian Post reported.

Graham also discussed the timing of the editorial, which was published just days before Christmas.

"Christmas is about giving, it's about God's love, God giving his son Jesus Christ to take our sins and die on the cross -- and watching the news show tonight, we see the evidence of sin all through Washington and around the world," Graham said.

"But, God gave his son to take our sins and if we are willing to repent and put our faith and trust in Christ, God will forgive us of our sins."

"This magazine is way off target," he added. "They are a very liberal left-wing magazine now ... but it does not speak for these Evangelical Christians."

"This magazine is way off target. They are a very liberal left-wing magazine now ... but it does not speak for these Evangelical Christians."

Graham also responded to recent comments from the Rev. Al Sharpton, who claimed pro-Trump evangelicals would "sell Jesus out" in favor of their judicial appointments of choice.

"We as Christians, and for me as an Evangelical, I'm concerned about the direction of our country ... religious liberty," he said.

"We saw under the Obama administration Christian businesses put out of business because of their religious beliefs," Graham explained.

"Under the Trump administration, these cases are disappearing and we appreciate the fact that the president is putting conservative judges in that appreciate religious freedom."