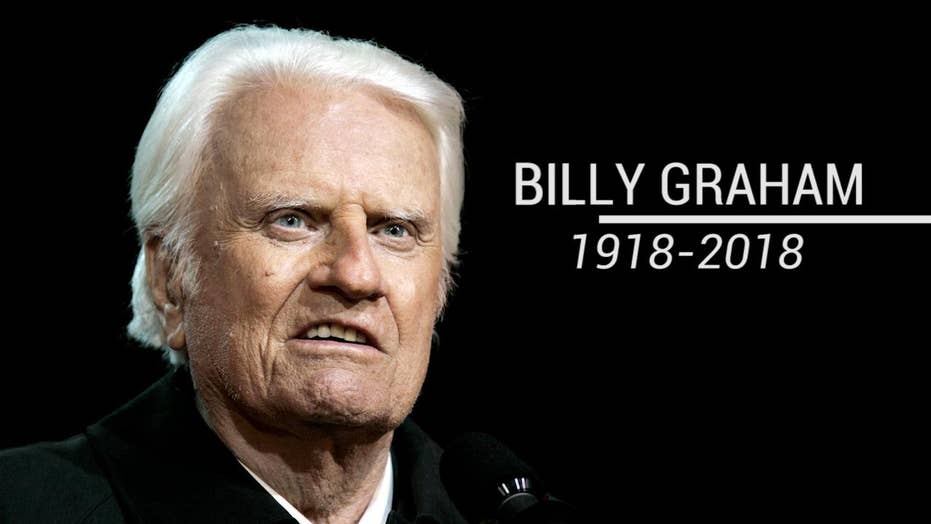 He’s known as ‘Amercia’s pastor,’ Rev. Billy Graham passed away at age 99. He’s preached to more live audiences than anyone in history and rose to prominence as a spiritual adviser for almost every U.S. president. Here’s a look back at Graham’s life and lasting legacy.

Mourners are gathering to give a final tribute to “America’s pastor,” famed Christian evangelist Rev. Billy Graham, Wednesday at a funeral service he began planning himself nearly a decade ago.

About 2,000 people, including President Trump and Vice President Mike Pence, were invited to attend the noon service for Graham, who died Feb. 21 at the age of 99. The service will take place under a tent outside the Billy Graham Library near his home in Charlotte, North Carolina.

After the service, Graham will be buried next to his wife in a memorial prayer garden at the library – with his grandchildren serving as pallbearers.

"His fingerprints are on this service for sure," family spokesman Mark DeMoss said. "The Graham family has long considered that his funeral eventually would really be his last crusade."

On Wednesday, Graham became only the fourth private person to lie under the U.S. Capitol Rotunda since 1998, joining civil rights icon Rosa Parks and two Capitol Police officers killed in the line of duty.

From authoring countless sermons, to bringing the Bible’s message to hundreds of nations, Graham’s life was dedicated to his family and work.

A Presidential Medal of Honor recipient, Graham has also met with every president since Harry S. Truman. Here’s a look at 9 things to know about the late evangelist.

He was raised on a dairy farm in North Carolina

Born on Nov. 7, 1918 as William Franklin Graham, he grew up on a dairy farm near Charlotte, N.C., according to his biography.

In this photo, Billy Graham is preaching the Gospel to thousands in Paris as part of his worldwide crusades in 1986. (Reuters)

He would become ordained in 1939 by Peniel Baptist Church in Palatka, Fla., which is part of the Southern Baptist Convention.

Graham preached to millions of people

According to his biography, Graham preached to more than 215 million people in more than 185 countries in his lifetime. And he reached others with his message through television programs and webcasts.

“Evangelist Billy Graham took Christ literally when He said in Mark 16:15, ‘Go ye into all the world and preach the Gospel to every creature,’” his biography states.

He’s met with every U.S. president since Truman

Graham met with every U.S. president since Harry S. Truman – and two even offered him positions in their administrations.

Graham turned down positions from both former presidents Lyndon B. Johnson and Richard Nixon, according to his website. But he reportedly did go skinny-dipping with Johnson once at the White House.

Billy Graham receives a medal as he is presented with an honorary knighthood by British Ambassador Sir Christopher Meyer in a ceremony at the British Embassy, December 6, 2001 in Washington. Graham was recognized for his contribution to civic and religious life for over sixty years, having preached the gospel to more people in live audiences than anyone in history. (Reuters/Mike Theiler)

In 2010, former President Barack Obama met with Graham at his home in Montreat, N.C. – the first sitting president to do so.

Bush and former President Bill Clinton already paid their respects to Graham at his evangelical center in Charlotte. Trump is expected to be the only living president to attend his funeral.

Graham was friendly with Queen Elizabeth and was knighted

Graham had a friendly relationship with Queen Elizabeth and spoke to her multiple times in her private chapel, his son, Franklin, told the Washington Post.

It’s also possible, Franklin said, that his father gave the queen a Bible – as he often gave foreign dignitaries the most recent one he was carrying.

Graham was made an honorary knight in December 2011 at a ceremony in Washington, the Telegraph reported. He was knighted by the British ambassador, Sir Christopher Meyer, on behalf of the queen.

He’s known for his “crusades”

Graham is known for the hundreds of “crusades” he embarked on throughout his life. Graham would travel to multiple countries and across the U.S. to preach the Gospel.

In this July 7, 1954 photo, Evangelist Billy Graham poses with his his wife, Ruth, and their three daughters on the Queen Mary following his arrival in New York. (AP Photo)

In 1957, he preached at Madison Square Garden in New York for 16 straight weeks to a packed audience.

Graham is the father of five children

Graham met his wife, Ruth, while they attended Wheaton College in Illinois. The pair married in 1943 and had five children.

Billy Graham visited with every U.S. president since Harry S. Truman. Former President Barack Obama was the first to visit him in his home in North Carolina. (Reuters/Pete Souza)

His children have all gone on to become speakers or involved in ministry in some form or fashion. His son, Franklin, is the president of the Billy Graham Evangelistic Association (BGEA), which his father founded in 1950.

At the time, Reagan praised his “untiring evangelism” and called him “one of the most inspirational spiritual leaders of the 20th century.”

“Billy Graham is an American who lives first and always for his fellow citizens. In honoring him, we give thanks for God's greatest spiritual gifts—faith, hope, and love,” Reagan said.

Graham is the author of dozens of books, sermons

Graham authored 32 books in his lifetime, including his autobiography, “Just As I Am.”

He was the target of the Ku Klux Klan

During heightened racial tensions in 1963, Graham refused to be deterred when the Ku Klux Klan targeted one of his planned crusades – an integrated event.

“The Ku Klux Klan went around and knocked out our signs,” Graham recalled in a BGEA blog post. “The State Police had to send policemen with us wherever we went — before my car and after my car. The police were also in the rooms around me because they were afraid we would get shot.”

According to the BGEA, the first massive integrated event in Alabama drew some 30,000 people.