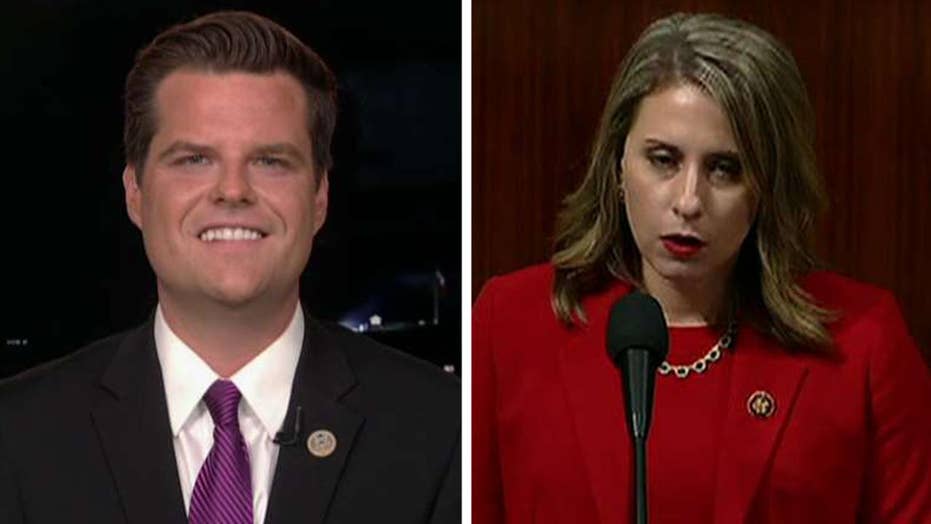 Rep. Matt Gaetz, R-Fla., defended former California Congresswoman Katie Hill and blasted her fellow Democrats for not rallying around her following a scandal that led to her resignation.

"This is an issue where a lot of millennials, I think sympathize with Katie Hill because a lot of young people who grew up with a smartphone in their hands took pictures, sent them, shared messages and materials that are now recoverable later in life," Gaetz said Thursday on "The Story with Martha MacCallum."

"Katie Hill's problem is not with Donald Trump. I wish she had not lashed out at him. Her ire should be directed at her fellow Democrats," he said.

Hill ripped into her political opponents on Thursday, denouncing what she called a "double standard" in politics that allegedly punished her while letting others off the hook.

Hill announced her resignation on Sunday after a media firestorm was ignited by intimate details about her personal life. Pornographic photos of her surfaced online after a conservative news site – RedState – reported on an extramarital affair that Hill allegedly had with staffers.

Gaetz was sympathetic to Hill and criticized her party for not supporting her.

"I don't know why in the world the left wouldn't stand up for our colleague, our co-worker, when the only person complaining, the only aggrieved party was Katie Hill's ex, who was releasing information to try to ruin her life," Gaets said.

The congressman accused "the left" of sacrificing Hill so that they can "weaponize" the #MeToo movement.

"I think that there is a dynamic on the left where they want to be able to weaponize the #MeToo movements so badly against Republicans that they're willing to sacrifice people like Katie Hill or Al Franken on the altar of political correctness so that they can preserve the sharpest dagger for Republicans that they don't like," Gaetz said.  "I don't think these issues should be partisan in nature."