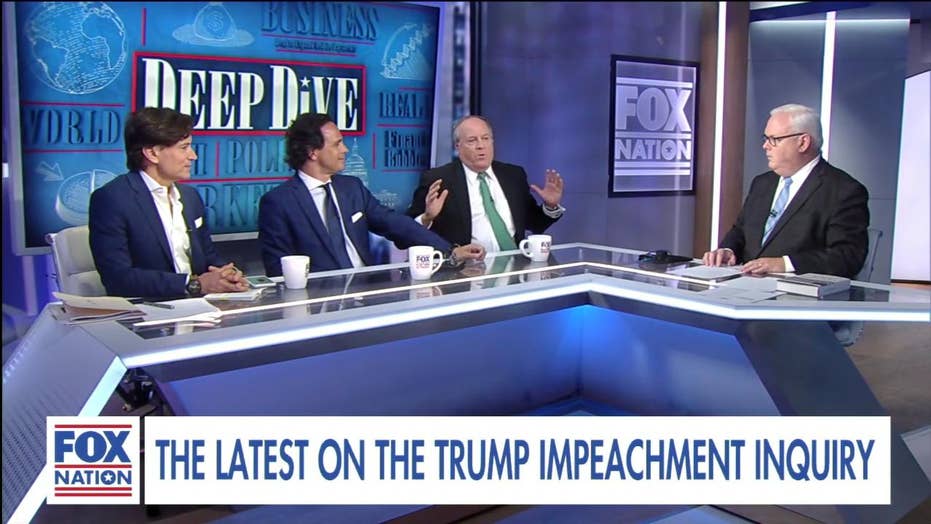 Democrats "may end up walking away" from their effort to impeach President Donald Trump, predicted Doug Burns, who is a former federal prosecutor in the Criminal Division of the Eastern District of New York and a practicing attorney.

On Fox Nation's "Deep Dive" Wednesday, Burns said that the "elephant in the room" is that House Speaker Nancy Pelosi, D-Calif., opted not to ask the full House of Representatives to vote on the question of opening a formal impeachment inquiry into President Trump.  Instead, Pelosi announced that an impeachment inquiry had begun, breaking precedent regarding these proceedings.

"You don't have to be a rocket scientist or an MIT professor to know that they didn't do a vote because they didn't want to have [Democratic House members] stand up in districts that were against it and have to vote for it," said Burns, adding that some moderate Democrats are hesitant to declare their support for impeachment.

He predicted that Democrats will eventually abandon their impeachment push.

"I think they're going to come out and [say]... 'We do not want to put the American public through this type of debacle. However, of course, it's fully warranted,'" Burns said.

"There's always a rhetorical flourish for everything, which achieves your goals semantically and rhetorically," he added.

"I don't see how... Mrs. Pelosi, once she's taken this step, I don't see how you can do it and I think if you don't impeach the president, it looks like another Mueller report," argued McGurn. "All these promises, 'We're gonna get him. We finally got him on the ropes and we don't do it.' I find it hard to believe the House won't impeach."

Tom Del Beccaro, former chairman of the California Republican Party, conceded that Pelosi and her fellow Democrats have taken a huge political risk by pursuing impeachment.

"On November 1st [2018] in the Washington Examiner, I predicted that the Democrats would turn to impeachment if they got the House, because having the House isn't enough. You can pass a bill, but if it's not signed, their base was never going to be pleased," Del Beccaro said.  "I said they would go to impeachment regardless of the facts. So here we are and what [Burns is] saying is the facts truly don't justify this."

However, Del Beccaro agreed with McGurn that Democrats will suffer politically if they don't follow through on their threats to impeach.

"The political point is that they have promised their base time and again and their base continues to move left -- [Rep. Alexandria Ocasio-Cortez] going to Bernie Sanders -- all of this, can they simply lose face again in an election year? This is some of the biggest roll of the dice that I have ever seen."

McGurn said: "I also think it's a risk more broadly for Democrats. I sort of think [former president] Bill Clinton came out stronger because the impeachment failed in the Senate. I don't think that was clear at the time... if [Trump's] impeached and not convicted, I think it will look like another Muller report."

Del Beccaro concluded: "I think historians 50 years from now will look back on this as a misguided attempt."

LEGAL EXPERT: PRESIDENT TRUMP'S SUCCESS WILL COUNT AGAINST HIM IN LAWSUIT AGAINST CNN

Former Obama State Department official and adviser to the Obama campaign David Tafuri said that Democrats will go through with impeachment, though it may take them longer than expected.

"I expect the Democrats will deliberate longer than we expect," Tafuri said. "It's going to take longer for them to get there. I think they'll vote in favor of impeachment. Articles will go to a trial in the Senate. It can be hard for him to be removed because 20 Republican senators would have to switch... [but] you never know when you get to a jury what's going to happen. That's the mystery of a court process like this. When it goes to the jury, the jury gets to decide."