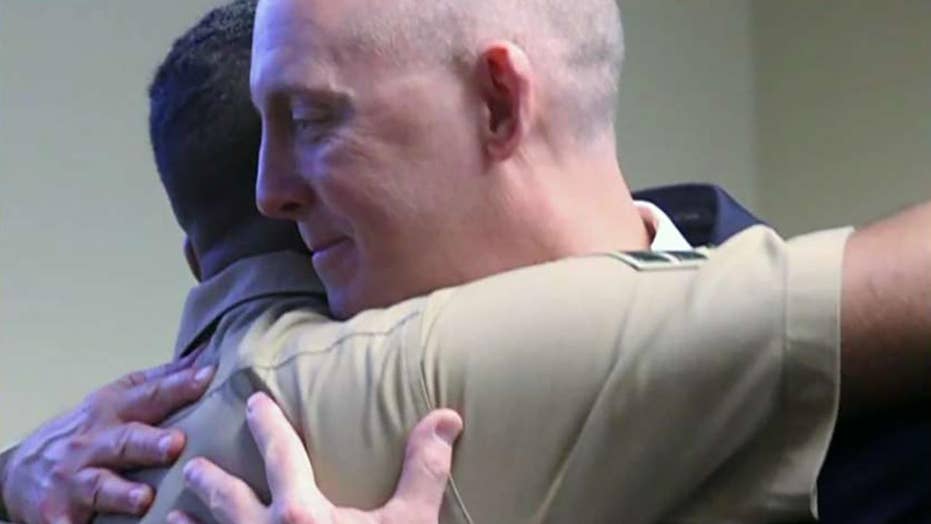 Marine reunited with FBI agent who saved him as a baby speaks out on 'Fox &amp; Friends'

A 22-year-old Marine who was kidnapped from a Washington state hospital as a baby speaks out after his reunion with the FBI agent who rescued him.

A U.S. Marine who was kidnapped from a Washington state hospital as an infant described his recent reunion with the FBI agent who rescued him as "humbling" and a "great honor."

“From what I’ve been told by my parents, this lady came into the hospital posing as a nurse at around 1:30 in the morning and told my mother that she was going to take me to the nursery and after that, they didn’t know where I was,” Cpl. Stewart Rembert told “Fox & Friends.”

It was FBI Special Agent Troy Sowers who found Rembert in a cardboard box near a restaurant dumpster 36 hours after the 1997 kidnapping.

Rembert said Sowers located his kidnapper with the help of military police in the Tacoma area. After Sowers confronted the woman, agents were able to convince her to reveal the location of the baby.

“It was humbling, a great honor, really to meet, like, an actual hero. It was a great opportunity for me and I think for the FBI to get this on camera," he told hosts Ainsley Earhardt and Pete Hegseth.

Rembert said his mother described the moment she realized he was kidnapped as “pandemonium.”

When Rembert was rescued, his mother also described to him that they were “absolutely relieved” and “ecstatic.”

Rembert is now a corporal and motor transportation operator and said his family has a long history of military service. Sowers told NBC News that getting to meet Rembert was "probably one of the best surprises I've ever had" and that he'd often wondered what happened to the boy he helped rescue.