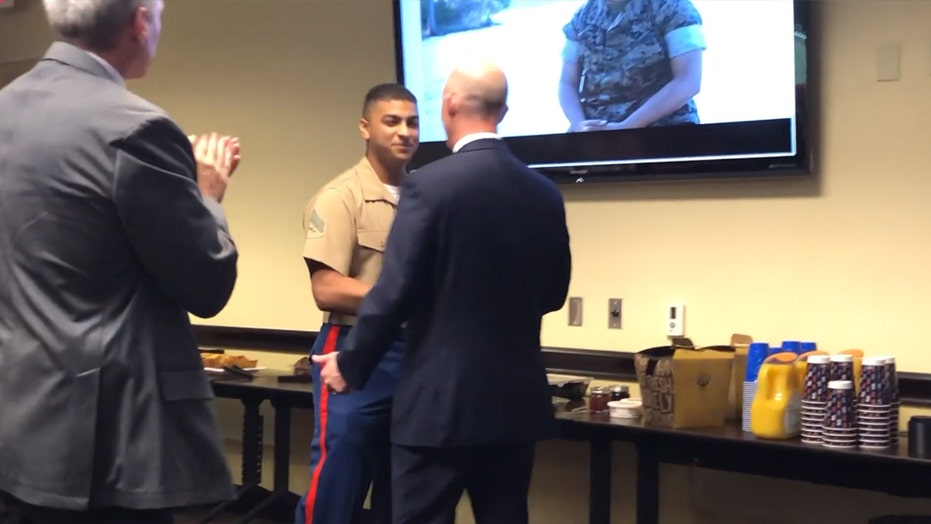 A Marine kidnapped as a newborn 22 years ago this month has finally met the FBI agent who found him.

Troy Sowers was on the job two months when he rescued Marine Corporal Stewart Rembert from a dumpster in Tacoma, Wash., on Aug. 23, 1997.

“Completely surprised they pulled this off,” Sowers said. “I did not know it at all. I'd wanted something very simple. I asked for coffee and donuts and they shocked me.”

Rembert was a 2-day-old baby when he was kidnapped from a Tacoma hospital by a woman wearing a white lab coat and posing as a doctor, the Knoxville News Sentinel reported Friday.

The woman spoke to Rembert's mother and offered to take the baby so the mother could get some sleep, reports at the time said.

The woman was arrested later that same day and told Sowers where she had abandoned the child, according to the News Sentinel.

Rembert said if it wasn’t for Sowers he wouldn't be where he was today -- serving as a Marine, according to WBIR-TV.

"This wouldn't have happened if you didn't find me,” he said, according to the station. “I want to thank you for giving me the opportunity of a life and being able to put on this uniform every day and be proud of what I do."

Sowers has never forgotten about the swaddled baby he found as he worked cases as an FBI agent for 22 years, the station reported.

"For me, it's kind of a fascinating story that somebody I had pulled out of a box had now started serving his country," he said.