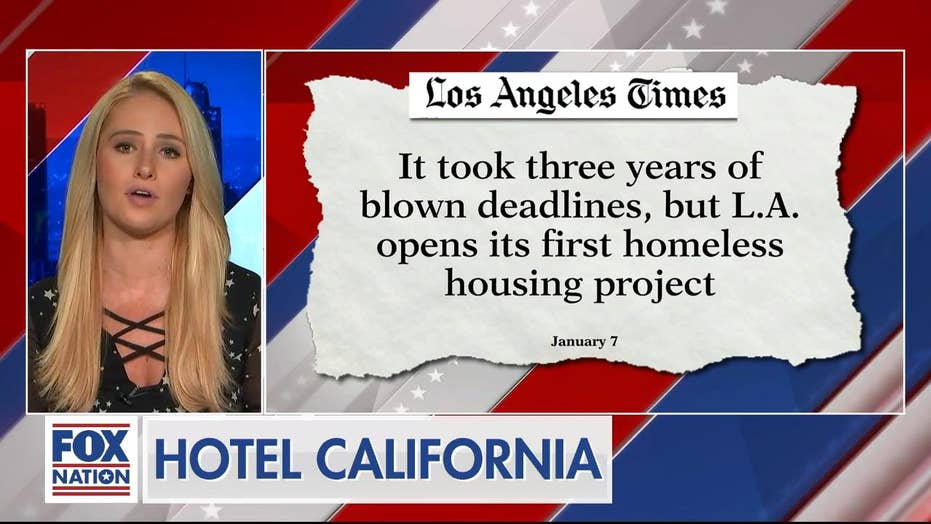 "A $1.2 billion homeless housing bond was approved by L.A. voters in 2016," said Fox Nation's Tomi Lahren. "And what, over three years later, do we have to show for it? A single housing project offering, get this, just 46 housing units."

Los Angeles Mayor Eric Garcetti unveiled the housing development on Monday. It's one of three facilities that were slated to open in 2019, yet it's the only one to be completed so far.

“As we celebrate today the opening of the first HHH housing project," said Garcetti, “we see here, in plain sight, what a vision is when it manifests itself physically.”

In fact, the price per unit was so high that Los Angeles' city controller recommended in October 2019 that the project be re-evaluated.

“The median cost of building many of these units approaches — and in many cases, exceeds — the median sale price of a condominium in the City of Los Angeles and of a single-family home in Los Angeles County,” read the audit, which was obtained by The Los Angeles Times.

"Not only is a single completed project laughable," continued Lahren, "it's also the perfect representation of the kind of failed leadership we have in Los Angeles and California as a whole."

"This prop HHH was sold to voters as the promise of 10,000 units in 10 years. Not gonna happen," Lahren said, pointing to new Los Angeles Times reporting.

The paper wrote that in order to meet the 10,000-unit goal, "the city would have to build another 300 housing units a year using other funding."

"Did you get that?" said Lahren. "The $1.2 billion bond isn't even enough. We need more funding. Once again, we've been duped, distracted and lied to."

At Monday's event, Garcetti acknowledged that the program will not build enough housing and called for more state funding, though he declined to specific an amount.

"Meanwhile, our homeless population is growing and growing fast," said Lahren. "We have about 59,000 homeless people in L.A. county and this city alone.  There has been a 16 percent increase in numbers from the year before."

"These people are dying in the streets, literally," she said.

Adam Rice, an organizer for the Los Angeles Community Action Network, told the Guardian in October, "We’ve got three people a day dying on the street. ... The reason this is happening is because there’s not proper housing."

"So I'll tell you what, Mayor Eric Garcetti," Lahren concluded. "You're going to need a hell of a lot more units to keep up. So while the opening of this one project may have been a photo-op moment you were looking for, you should be ashamed."

"Instead of you and your fellow Democrats patting themselves on the back for a job poorly executed. Perhaps you should get to work, figure out why these projects are taking so long and costing so damn much and make a change."