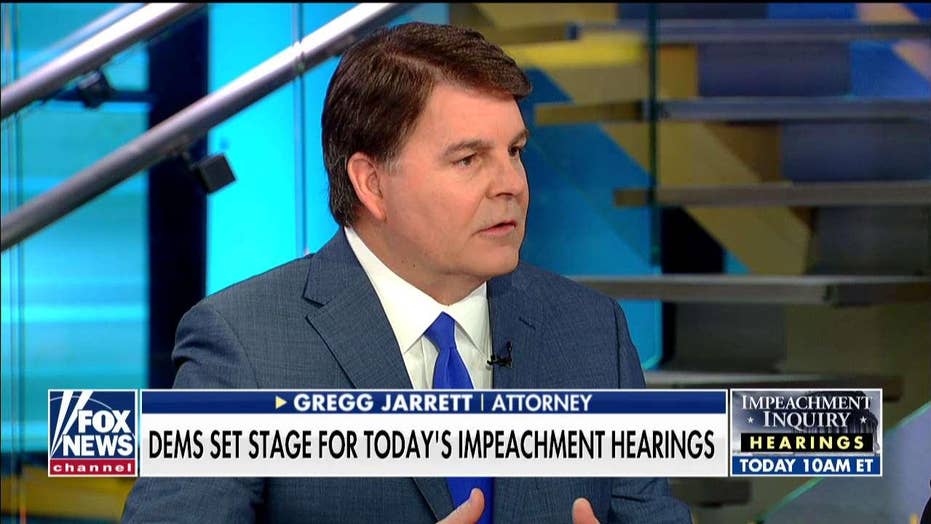 The presumption of a quid pro quo is junk and not evidence that would hold up in court, Fox News legal analyst Gregg Jarrett said Wednesday.

House Democrats are set to hold the first public hearing involving the potential impeachment of a president since November 19, 1998.

The first witnesses chosen are Ambassador Bill Taylor and career Foreign Service officer George Kent -- both of whom have already testified behind closed doors. In addition, former U.S. ambassador to Ukraine Marie Yovanovitch is set to testify Friday.

Aside from witnesses, there will also be exhibits -- lots and lots of exhibits. Democrats, at least, are expected to display excerpts from transcripts, text messages, relevant news articles, and social media posts.

Appearing on a "Fox & Friends" panel of legal experts, Jarrett told host Brian Kilmeade that the problem with the witnesses who are set to testify is "they're offering their opinions and speculation based on hearsay."

"I'll give you just one example: George Kent," said Jarrett. " He got it from Bill Taylor who got it from [White House adviser Tim] Morrison, who got it from [US ambassador to the EU Gordon] Sondland. Where did Sondland get it? He testified he just presumed there was a quid pro quo."

Former U.S. Attorney for Utah Brett Tolman added that, as a lawyer, what you want is substantive fact.

"You've got to have direct evidence to convict someone, especially in the court of public opinion," he said.

Former federal prosecutor Robert Ray noted: "The Democrats seem to think that this is an impeachment of an administration."

"They don't even know the president -- didn't talk to him about. So, how can they imagine or speculate his intent?" Jarrett asked.

"The president has every right if he has reason to believe that a corrupt act was committed by a public official, to ask the foreign government for that information. Isn't that what Americans would want to know? Of course," he said.