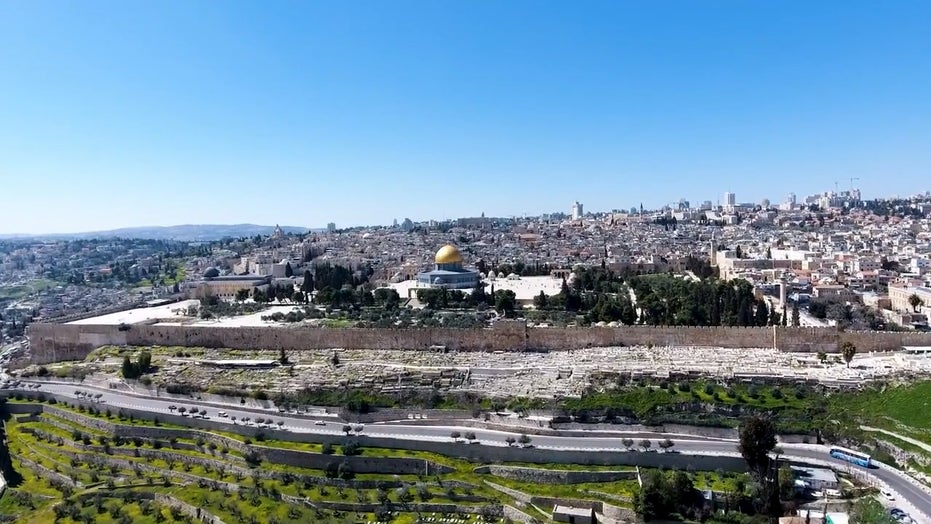 In the weeks before Easter, the streets of the Old City of Jerusalem are usually packed with tourists and pilgrims flocking to the world's holiest places.

But amid the coronavirus pandemic, the ancient alleys, churches, temples, and mosques are silent as sacred sites for the three major religions are shuttered out of concern for public health.

Notably, in the run-up to Holy Week, the period of time between Palm Sunday and Easter Sunday, the Church of the Holy Sepulchre, which is said to be built on the spot where Jesus Christ was buried and resurrected, is closed for the first time since the Black Plague in the 1300s.

However, viewers can still see and learn about the Church of the Holy Sepulcher and other significant sites in the Fox Nation series, "Holy Week," hosted by Fox News co-host Pete Hegseth.

In the 4-part series "Holy Week," Hegseth explores the story of Jesus Christ and the principals of the Christian faith by visiting ancient landmarks and examining the art and architect that remains today.

In the first episode, Hegseth walks viewers through a pilgrimage to the Old City, retracing the steps that Jesus took after he entered Jerusalem on Palm Sunday.

"Every year, thousands of pilgrims come to reenact the events that led up to Easter, the holiest day in the Christian calendar," narrated Hegseth in the Fox Nation show.

"Holy Week begins on Palm Sunday, commemorating Jesus's triumphant entrance into Jerusalem," he continued. "Crowds gathered to worship in laying down palm leaves before him as he rode in on a borrowed donkey. However, in the days that followed, the crowds turned against him, culminating in his crucifixion on Good Friday."

Among the other Biblical locations detailed by Hegseth in the Fox Nation special is the Mount of Olives, where Jesus traveled on Palm Sunday and wept over the fate of Jerusalem.

"The Mount of Olives is one of three hills on a long ridge to the east of Jerusalem, where many biblical events occurred," said Hegseth. "Rising to more than 2,600 feet, it provides visitors with an exceptional panorama of the old city and its vicinity."

PASTOR: HOW TO STAY 'SPIRITUALLY HEALTHY' DURING CORONAVIRUS QUARANTINE

"In Jewish tradition, the Messiah will descend the Mount of Olives on Judgment Day," he continued. "This gate was blocked with stones at the end of the 10th century. The Ottoman, Sultan Suleiman the Magnificent walled this gate up when he rebuilt the city walls in 1541."

"Today, tomb's cover the Mount of Olives. And it is one of Jerusalem's main cemeteries with around 150,000 graves. The Mount of Olives gets its name due to the fact that it was once covered with olive trees."

In Fox Nation's documentary, "Battle for Bethlehem," Hegseth traveled to the Holy Land to investigate why Christians are leaving the birthplace of Jesus Christ.  He spoke to experts on all sides of the issue and took viewers through a history of the city, beginning with the most significant event in Christianity, the birth of Jesus.

"For centuries, Christian pilgrims from around the world have been drawn here to celebrate," narrated Hegseth, as he and his camera crew went into the cave where Jesus was born.

"In the Church of the Nativity, three different denominations control it. The Armenians, the Greeks, and the Catholics," said Hegseth from inside the shrine. "Each day for the Catholic Church at twelve-noon, there's a procession down to the cave, the manger scene, the birthplace of Jesus. So you can see day by day, every single day, at the same time, Catholics, Armenians, Greeks are honoring this holy place and the birthplace of Jesus Christ."

PETE HEGSETH: THE REAL STORY OF JERUSALEM AND WHY IT MATTERS

The final episode of the 4-part series "Holy Week," begins at the Church of the Holy Sepulcher where Mary Magdalene discovered Jesus' empty tomb.

Next, it takes viewers to the Biblical site of Emmaus where Jesus appeared to his disciples after his resurrection, and lastly, to the shore of the Sea of Galilee, where Jesus bequeathed the keys of his kingdom to Peter to build his church.

To watch all of "Holy Week," and all the other on-demand content that Fox Nation is offering -- sign up today.