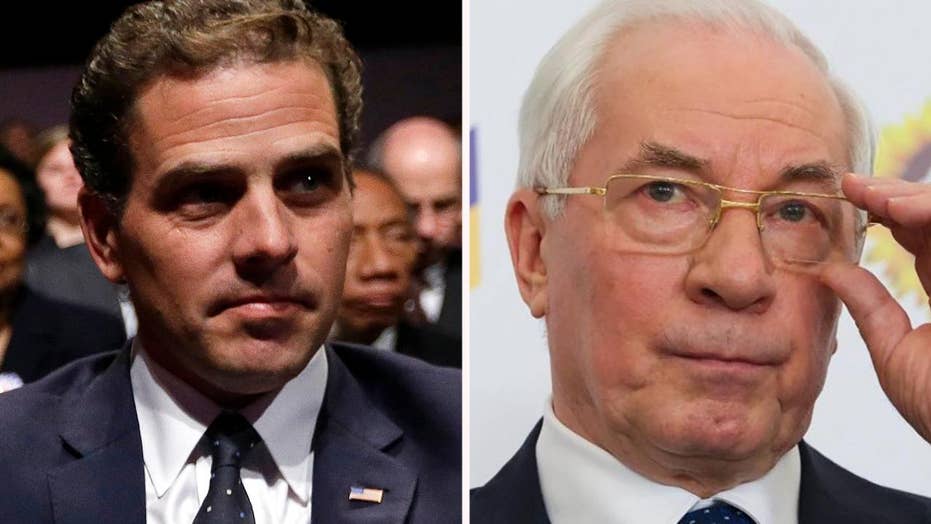 Robin Biro and Rachel Bovard debate whether or not Joe Biden will still be able to win the 2020 Democratic nomination if there is a probe into his son's business dealings.

According to the study, ABC, NBC, and CBS took seven hours and five minutes out of their morning and evening news shows to focus on the controversy surrounding President Trump and Ukraine. The study, conducted from Sept. 20 to Sept. 30, showed that only 46 minutes of that time was devoted to Hunter Biden and his father. That included 12 minutes from ABC, 16 minutes from CBS, and 18 minutes from NBC.

CHAFFETZ: LACK OF COVERAGE OF HUNTER BIDEN'S INVOLVEMENT WITH UKRAINE IS 'SUCH A DOUBLE STANDARD'

The study's Sept. 20 start date was around the time when news reports surfaced that the administration allegedly suppressed a whistleblower report on Trump asking the Ukrainian president to investigate former Vice President Biden. The former vice president has come under fire for pressuring the Eastern European nation to fire its top prosecutor, who had been investigating Burisma Holdings, where Hunter Biden sat on the board.

While Democrats have seized on the issue as a springboard for impeachment, Republicans have tried to refocus the conversation on the Bidens.

"Even when networks mentioned Trump’s concern about Hunter benefiting from his father’s status as vice president, they were quick to dismiss the allegations with the refrain: 'no evidence of any wrongdoing,'" Newsbusters' Geoffrey Dickens wrote.

Dickens quoted reporters on each of the three networks downplaying the idea that Hunter Biden engaged in any misconduct.

"Over on the Sept. 20 NBC Nightly News," Dickens wrote, "correspondent Hallie Jackson also downplayed any conflict of interest involving Hunter Biden: 'The President’s personal attorney Rudy Giuliani has suggested then-Vice President Biden tried to stop an investigation into a Ukrainian company that named his son to its board, despite no evidence of wrongdoing by Joe Biden.'"

"But if the networks dared to look just a little bit into Hunter Biden’s history with the Ukranian energy company Burisma, they’d find plenty of evidence of questionable behavior involving the Bidens – that would be worth more than 46 minutes of coverage," Dickens added.

He pointed to a book authored by Peter Schweizer, who has defended the idea that Ukraine should investigate Hunter Biden's business dealings.

“There’s no conspiracy theory here,” Schweizer, the author of “Secret Empires,” told “Fox & Friends” on Monday. “It’s the oldest game in politics, which is: follow the money and self-enrichment. Joe Biden just wants these issues to go away.”

He added that Hunter Biden's activities were documented and that his father shouldn't dismiss the issue as a conspiracy theory. Schweizer pointed to "his son joining this corrupt board where he had no background and expertise in the country and his son doing the same thing in China."