Mount Rushmore National Memorial in Keystone, South Dakota, is one of the most visited monuments in the country, but its long history and secrets are unknown to many Americans.

In the Fox Nation series "What Made America Great," "Fox and Friends" co-host Brian Kilmeade got an official tour and special access to this iconic tribute to America's greatest presidents.

"Four presidents carved into the side of a mountain, as impressive as that is, what's more inspiring is how they got it done," narrated Kilmeade in the Fox Nation show, "and it began in 1927."

The concept of carving gigantic figures into the face of mountains was originally the idea of Doane Robinson, who was South Dakota's state historic officer, explained Cheryl Schreier, superintendent of the Mount Rushmore National Memorial.

"[Robinson] had this idea of creating carvings of some of the Western heroes like Lewis and Clark, Buffalo Bill Cody," said Schreier, "and then he contacted Gutzon Borglum, the sculptor, who had different ideas about who should be on the mountain."

It would take Borglum and 400 men 14 years to sculpt the faces of George Washington, Thomas Jefferson, Theodore Roosevelt and Abraham Lincoln into the hard granite.

Borglum picked these four presidents to represent significant stages of the nation's first 150 years. Washington was selected to represent the birth of America, Jefferson marked its expansion, Lincoln stood for the unification of the country and Roosevelt signified the development of the country. 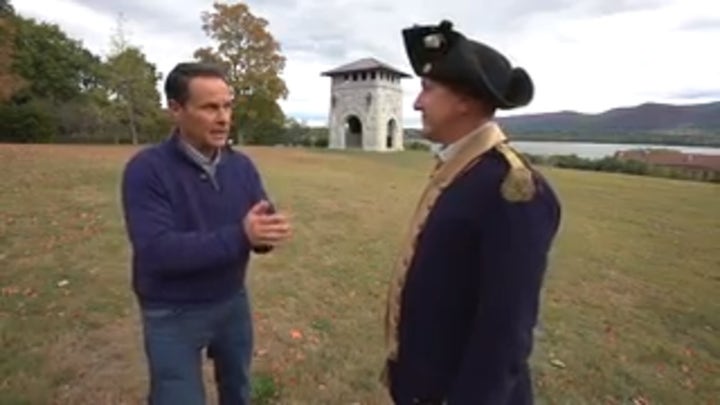 However, the memorial today does not represent Borglum's full vision. In fact, Borglum died before the construction was completed, and his son, Lincoln Borglum, completed the work.

One of the sections that remain uncompleted may have been one of its grandest features. Borglum called it the Hall of Records, and Kilmeade got an exclusive look at this secret of Mount Rushmore.

"The Hall of Records is a place that is a canyon back behind the sculpture," explained Schreier, describing the location of the unfinished vault behind the carving of Jefferson.

"[Borglum's] idea was to have everything archived that had something to do with the history of the presidents, the history of the carving, and also those very important documents, the Constitution, the Bill of Rights, the Gettysburg Address," she continued. "That was going to be housed in this Hall of Records for eternity."

Borglum's original plan called for a massive staircase of granite that would rise from the ground level and ascend to the Hall of Records. Today, the only way it can be reached is on foot, following a rough path that is closed to the public. And it leads nearly straight up.

To watch all of this special episode of "What Made America Great," and see inside the incomplete Hall of Records, go to Fox Nation and sign up today.