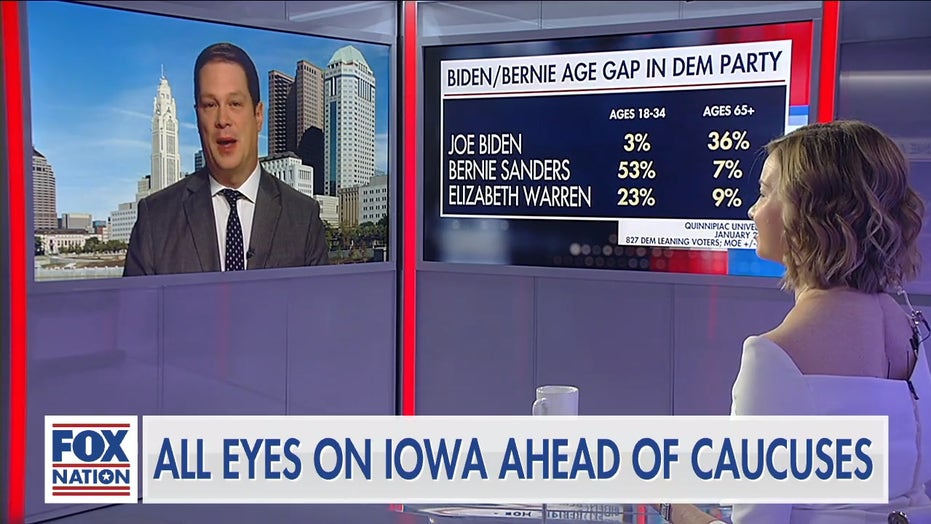 Bernie Sanders is future of Democratic Party and that may spell trouble in 2020: Pollster

A new national poll showed a startling divide among American voters — and it is not between Republicans and Democrats. It is between younger and older Democratic voters and it may signal trouble for the donkey party in 2020.

The Quinnipiac University survey, conducted from Jan. 22 to 27, revealed that just 3 percent of Democrat-leaning voters, age 18 to 34 years old, supports former Vice President Joe Biden. As many as 53 percent of that same age group goes for Sen. Bernie Sanders, I-Vt.

Older voters, aged 65 years and older, throw their backing to Biden over Sanders, 36 percent to 7 percent.

"Those splits are amazing," said RealClearPolitics senior elections analyst Sean Trende on Fox Nation's "What Are The Odds?"

"I think the bigger story from these numbers is that someone like Sanders is the future of the Democratic Party," continued Trende, though he warned that the Democratic party may not be ready to make Sanders their standard-bearer just yet.

"Is there any risk for the general election, if Joe Biden is the Democratic nominee, that young voters - who so love Bernie Sanders - ... decide to stay home?" asked Fox News contributor and pollster Kristen Soltis Anderson.

"Yeah, that's the concern," replied Trende. "I think where the real danger comes in is if you have a scenario where Bernie wins Iowa, New Hampshire, maybe Nevada, and then Biden comes from behind... you'll get the storyline that the Democratic establishment kind of conspired to keep Sanders down."

During the 2016 Democratic presidential primary, then-Democratic National Committee chair Debbie Wasserman Schultz abruptly resigned her position amid the fallout over leaked emails indicating an anti-Bernie Sanders bias in her operation. Former Secretary of State Hillary Clinton went on the secure the Democratic party nomination that year.

"That's where you could really see the turnout [decline] and even if we're only talking about two or three percentage, 2020 is probably going to be a pretty close race. So even if just two or three percent of the young voters decide to stay home, it could be determinative of the outcome," said Trende.