"I don't care what you think about abortion.  The idea that you abort to mitigate an increase in the planet's temperature decades from now is about as immoral as you can get," said Varney on his Fox Nation show, "My Take".

Sen. Sanders made the remarks during a CNN town hall telecast solely focused on the issue of climate change.  An audience member asked Sen. Sanders, "Empowering women and educating everyone on the need to curb population growth seems a reasonable campaign to enact. Would you be courageous enough to discuss this issue and make it a key feature of a plan to address climate catastrophe?"

Sanders responded in the affirmative, suggesting that abortions would play a role in his approach to combating climate change. "[T]he answer has everything to do with the fact that women — in the United States of America, by the way — have a right to control their own bodies and make reproductive decisions. And the Mexico City agreement, which denies American aid to those organizations around the world that allow women to have abortions or even get involved in birth control, to me is totally absurd. So I think especially in poor countries around the world, where women do not necessarily want to have large numbers of babies and where they can have the opportunity through birth control to limit the number of kids they have -- something I very, very strongly support," he said.

The Mexico City policy was first implemented in 1984 by the Reagan administration and has since been rescinded and reinstated numerous times by various presidential administrations along party lines.

"If elected, Bernie would make us pay.  Why? Because population growth aggravates climate change he says," said Varney, adding sarcastically, "So, reduce the number of people on the planet so we can save the planet,"

Varney and other commentators also raised concerns over the implications of the U.S. funding birth control, as part of efforts to combat climate change, in "poor countries around the world", as Sen. Sanders suggested in his town hall answer. 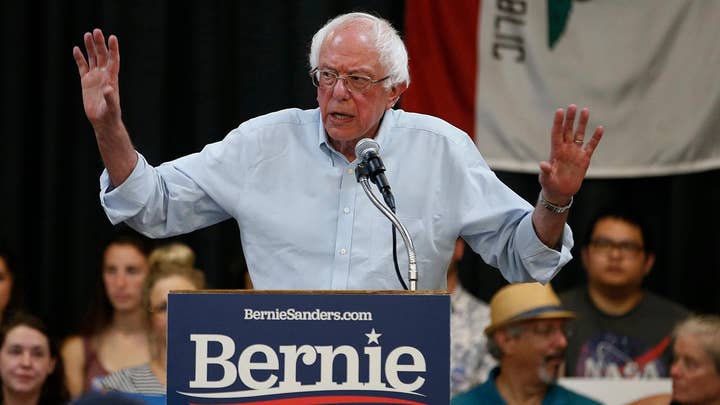 The pro-life group, Susan B. Anthony List, sent a statement, that said, "Bernie Sanders’ repugnant ‘solution’ to climate change – eliminating the children of poorer nations through abortion, paid for by American tax dollars – should be condemned across the political spectrum."

Varney observed, "Can you imagine what the media would say if a conservative were to say the same thing?"

Sen. Sanders was not the only Democratic candidate from the CNN forum that drew Varney's attention, he was also struck by former Vice President Joe Biden's answer to one audience member.

"Joe Biden was questioned about oil company executives committing 'crimes against humanity' and he did not push back -- tacitly agreeing with the questioner.  Are you kidding me?  The fossil fuels that clearly help make America what it is added up to a 'crime against humanity'?" said Varney, "You sit back astonished that Presidential candidates should abandon reason and jump into fantasy land."

Varney concluded, "Nothing compares to Bernie's call for Third World population control through abortion.  That is as callous as you can get, and for me frankly, it is disgusting."