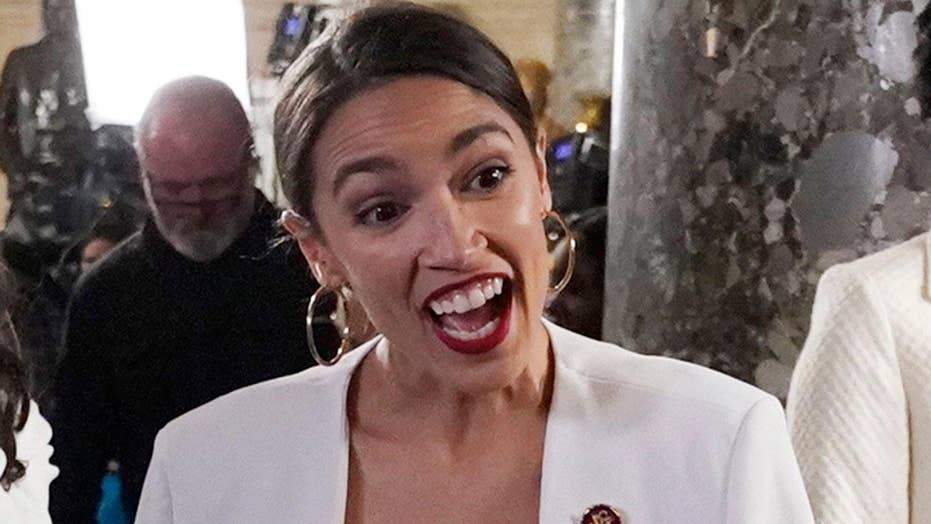 Freshman Rep. Alexandria Ocasio-Cortez said young people have to ask a “legitimate question” in the wake of climate change and mounting student loan debt: “Is it okay to still have children?”

In an Instagram Live video over the weekend, Ocasio-Cortez, D-N.Y., welcomed supporters into her kitchen—and gave a “special hello to my haters”—while she made chili and poured herself a glass of white wine.

“Our planet is going to face disaster if we don’t turn this ship around,” she said, as she chopped sweet potatoes. “And so it’s basically like, there is a scientific consensus that the lives of children are going to be very difficult and it does lead, I think young people, to have a legitimate question. Ya know, should—is it okay to still have children?”

She continued: “Not just financially because people are graduating with 20, 30, 100 thousand dollars of student loan debt so they can’t even afford to have kids in the house, but there’s also just this basic moral question, like, what do we do?”

“And even if you don’t have kids, there are still children here in the world and we have a moral obligation to them to leave a better world to them.”

Ocasio-Cortez answered questions from viewers while she continued to prepare her meal.

“What would Trump put in chili? BOLOGNA!” she quipped. “He would put bologna in chili. Both because I think that’s what his taste palate is developed to, and for the obvious reason.”

But one of the serious questions was about her signature proposal in the House- the Green New Deal.

“The whole premise of the Green New Deal, is that we’re screwed on climate. I’m sorry to break it to you,” she said. “When it comes to climate in particular, we’re actually screwed. There is a global threat to the planet.”

“Hurricanes, storms, wildfires,” she said. “We are dying now.”

While the resolution itself would do little because it is non-binding, it is the first time the policy proposal has been formally outlined in Congress.

“If we called a vote on the Green New Deal, tomorrow or Tuesday when I got back to D.C., and it passed, NOTHING WOULD HAPPEN,” she stressed, seemingly downplaying the impact should it be passed. “Literally, nothing would happen because it is a resolution. It is a statement. Be it resolved. It is us agreeing to a statement. Not any binding course of action.”

The resolution says “a new national social, industrial and economic mobilization on a scale not seen since World War II and the New Deal” is an opportunity to tackle systemic injustices toward minority groups, create millions of high-wage jobs and “provide unprecedented levels of prosperity and economic security for all people of the United States.”

Its proposals include “net-zero greenhouse gas emissions through a fair and just transition for all communities and workers;” job creation; healthcare for all;  infrastructure investment; guarantees of clean water, healthy food and sustainable environment; and a curiously undefined “access to nature.”

Beyond those broad proposals, the plan and accompanying documents from Ocasio-Cortez include a range of far-fetched goals -- and drew swift scorn from Republicans and other critics. The Republican National Committee dubbed it a "socialist wish list" that would kill at least 1 million jobs and disrupt global trade -- while costing trillions.

Meanwhile, Ocasio-Cortez went on to slam veteran lawmakers for “failing at the same things” for decades, after Sen. Dianne Feinstein, D-Calif., over the weekend was confronted by a group of children urging that she vote for the Green New Deal proposal.

Feinstein, though, defended her position and her record, in response to the confrontation.

“You know what’s interesting about this group? I’ve been doing this for 30 years. I know what I’m doing. You come in here, and you say, ‘It has to be my way or the highway.’ I don’t respond to that. I’ve gotten elected. I just ran. I was elected by almost a million-vote plurality, and I know what I’m doing. Maybe people should listen a little bit,” Feinstein said in a video of the encounter outside her office shared on Facebook by the Sunrise Movement, a climate advocacy group.

Ocasio-Cortez, in an apparent swipe at Feinstein, said working on an issue for decades does not make you “qualified” to solve a problem.

"The issue has gotten worse. So I don't think that working on an issue for 30 years alone is what qualifies as-as what makes someone qualified to solve an issue," Ocasio-Cortez said in a swipe at Feinstein.

"That said, there are a lot of people that have been doing this work for decades that have proposed ambitious solutions for years and have not been listened to," she added. "So it's not just, 'I've been doing this for 30 years,' so we need to listen to them because frankly people have been failing at the same things for 30 or 40 years. What we need to do is say, 'What solutions have not been tried yet? And what ambitious scale have we not shot at yet.' And let's do it.”

In her live video stream, Ocasio-Cortez also addressed reports that she had moved from her Bronx apartment to another.

"It's so funny like, like, it gets so weird with all this media attention because this is not a normal thing. It's really not normal, and what's really weird is that it just gets so like, it's so crazy, its like people are literally, it feels to me like hysteria, but maybe it's because all of this stuff is about me," she said. "Yeah, I live in the same neighborhood but I had to move apartments because you know, death threats---slash, I needed two bedrooms.”