Any Ngo speaks out about Antifa activist who was sentenced to six years in prison on "America's Newsroom."&nbsp;

Prosecutors should be more vigilant in bringing charges against members of Antifa and push for prison time, said journalist Andy Ngo, describing a "terrifying" Halloween incident in which a group of men tried to force their way into his home.

Ngo discussed the case of an Antifa activist who was sentenced to six years in prison for cracking a man's skull open during a demonstration at which he was present in Portland, Oregon. He said the assailant's allies have gotten off easy and urged law enforcement to double their efforts.

"I wanted to point out this is only the second violent Antifa criminal across the United States to face actual prison time," he said Monday on "America's Newsroom."

"The first one was a militant in New York City just last month who was sentenced to 18 months. So I hope that this marks a new trend in prosecutors pushing for actual convictions and sentencing.

"People may remember Eric Clanton, the academic Antifa person with the bike lock in California," Ngo continued. "Police say that he had bashed seven people in the head with his bike lock and yet, in the end, he only had a misdemeanor conviction and probation time."

Ngo was attacked and mugged by an unidentified member of Antifa during the June protest in Portland, but police have yet to come up with any leads on who is responsible.

"Not a single person has been arrested for beating and robbing me," he told Fox News.

Gage Halupowski, a 24-year-old from Oregon City, was sentenced to six years for second-degree assault after he used an expanded metal baton to inflict gashes upon his victim, which required staples to close shut.

"There's actually graphic, shocking video of the attack on this victim," Ngo said. "This group of people after beating me moved to another part of downtown and began rioting and it was there they struck this man on the back of the head with brutal melee weapons, and you could actually hear the sound of the impact.

"I am just thankful that this victim survived," he continued. "The attorney... of this militant is saying the sentencing is too severe. My response is, it's not severe enough."

Ngo also shared a video--taken outside his home on Halloween night--of trespassers attempting to intimidate him at his family home by wearing masks and trying to force his front door open. 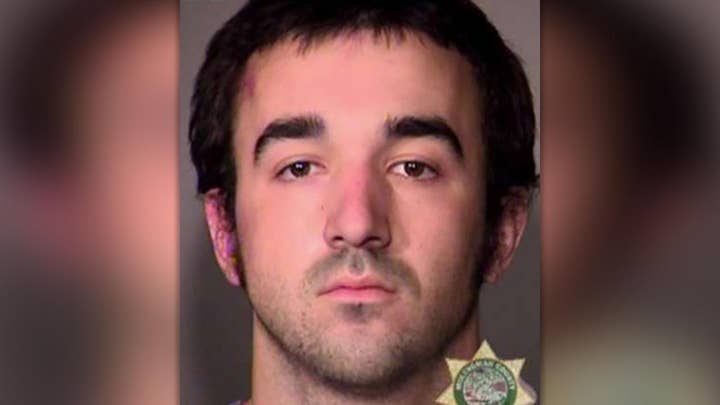 "It was a surreal moment. It looked like something out of the Purge," he said. "I was actually home when this happened and quite terrified. I was home alone. This is my family's home... One of the things Antifa does is... [release] people's addresses online and give a wink to their comrades to come and do something.

"So they came with these printed masks of my face... pounding on the door, was trying to open the door," Ngo added. "Fortunately I had security footage. By the time the police arrived... they were all gone. But I released it just so that the public can be aware of the intimidation tactics of this violent extremist movement."