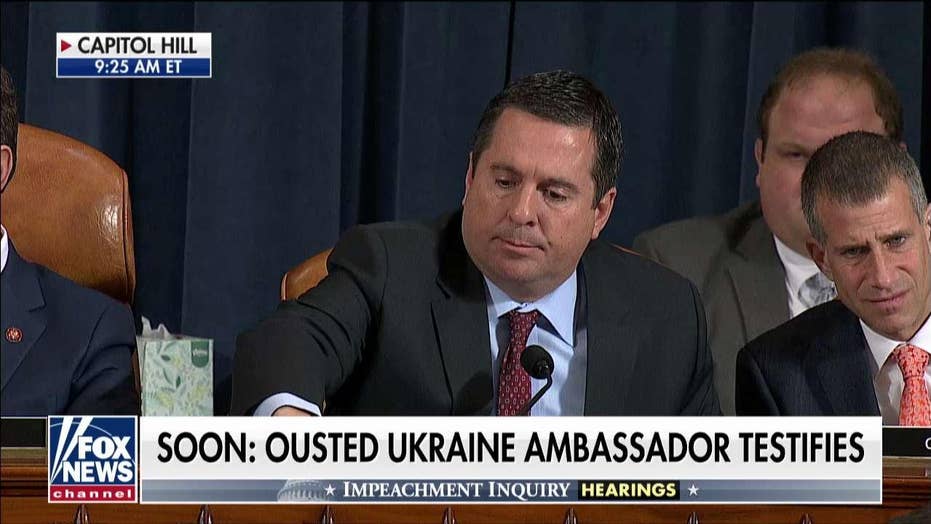 On the second day of Democrats' public impeachment hearings into President Trump, House Intelligence Chairman Adam Schiff, D-Calif., spoke directly into the camera and told the president to stop "obstructing" their investigation.

"We would ask the president to stop obstructing the impeachment inquiry," Schiff said. "And, while we're grateful he has released a single document, he has nonetheless obstructed witnesses and their testimony and the production of thousands and thousands of other records."

YOVANOVITCH TESTIFIES OF BEING ‘KNEECAPPED,' AS TRUMP CLAIMS EVERYWHERE SHE WORKED 'TURNED BAD'

Schiff also used to his gavel to shut down and reject points of order from several GOP members who reacted in disbelief.

Committee Ranking Member Devin Nunes, R-Calif., had just read through a new transcript of the president's phone call with Zelensky. Schiff responded, locking eyes with the cameras, urging the president to "release the thousands of other records that he has instructed the State Department not to release."

Schiff said that included notes from previous witness Ambassador Bill Taylor and George Kent's memo as well as documents from the Office of Management and Budget.