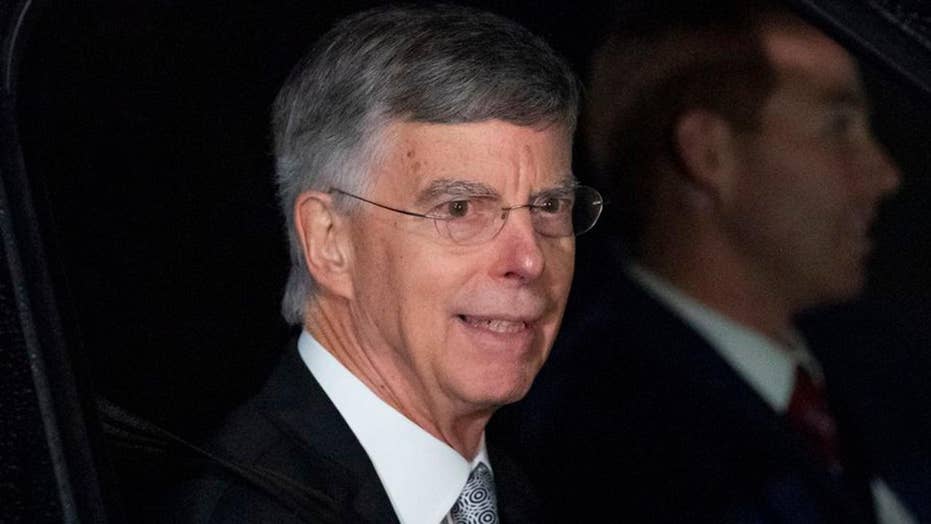 As the House of Representatives' impeachment inquiry into President Trump moves into a new, public phase, Bill Taylor, the top U.S. diplomat in Ukraine, will be one of the first witnesses to be heard in the televised hearings scheduled for this week.

Taylor, the U.S. chargé d'affaires in Ukraine, and Deputy Assistant Secretary of State for Europe George Kent are to appear before the House Intelligence Committee on Wednesday and former U.S. Ambassador to Ukraine Marie Yovanovitch is set to testify before lawmakers Friday.

Democrats have been moving quickly with their investigation, sparked by a whistleblower complaint, over whether President Trump improperly used his office to pressure Ukranian President Voldomyr Zelensky into ordering investigations that could have been politically beneficial to his reelection campaign in exchange for the release of about $400 million in military aid. The president has said repeatedly that he's done nothing wrong.

Wednesday's hearing presents an opportunity for Democrats to make their case on why Trump should be impeached directly to voters, and for Republicans to poke holes in their argument.

The following is a look back at Bill Taylor's background and connection to the impeachment inquiry:

Ambassador William Taylor arriving for a closed-door meeting to testify as part of the House impeachment inquiry into President Trump on Oct. 22. House investigators are bringing Taylor back for a public hearing on Wednesday. (AP, File)

Taylor began his career in the U.S. government as a cadet at West Point before serving as an Army infantry officer for six years, including in Vietnam. His career mostly has been with the State Department, with stops in Afghanistan, Iraq, Jerusalem and Ukraine.

He served as ambassador to Ukraine from 2006 to 2009 and returned as chargé d'affaires in 2019 after the Trump administration ousted Yovanovitch as ambassador. Before returning as the top American diplomat to Ukraine in June, Taylor was working as the executive vice president at the U.S. Institute of Peace.

"I have dedicated my life to serving U.S. interests at home and abroad, both in military and civilian roles," Taylor told House investigators on Oct. 22. "My background and experience are nonpartisan, and I have been honored to serve under every administration, Republican and Democratic, since 1985."

Taylor said Secretary of State Mike Pompeo asked him to lead the U.S. embassy in Kiev on May 28.

SHOULD THE GOP BE ABLE TO QUESTION THE WHISTLEBLOWER

"I wanted to say yes," Taylor told House investigators. "The former ambassador, Masha Yovanovitch, had been treated poorly, caught in a web of political machinations, both in Kiev and Washington. I feared that those problems were still present."

Taylor eventually took the job, he said, after Yovanovitch encouraged him to do so and Pompeo gave him assurances that the U.S. would continue to support Ukraine in its continued efforts to break away from Russian influence.

Democrats likely will try to use Taylor's testimony to establish that the Trump administration was using military aid to leverage Ukraine into pursuing investigations that would be politically beneficial to Trump.

"That was my clear understanding, security assistance money would not come until the president [of Ukraine] committed to pursue the investigation," Taylor said in his closed-door deposition.

Republicans have pushed back, arguing Taylor did not have primary knowledge regarding the key events in question, but based his testimony off conversations with others instead.

Democrats also are expected to highlight the diplomat's concerns about the Trump administration's two channels of diplomacy with Ukraine, one that was seen as "highly" "irregular" and another that was "regular."

The "irregular: policy channel "was guided" by Trump's personal attorney Rudy Giuliani, according to Taylor, and included U.S. envoy Kurt Volker, U.S. Ambassador to the European Union Gordon Sondland and Energy Secretary Rick Perry. These officials also have been implicated in allegedly seeking the quid pro quo -- military aid for investigations -- that has been at the heart of the impeachment inquiry.

Taylor also told lawmakers former national security adviser John Bolton was upset by the efforts of the "irregular" policy channel and its members' efforts to extract investigations from the Ukrainian government, which he called a "drug deal" and ordered his aides to avoid.

A meeting with Trump at the White House, which Zelensky had sought since he assumed office earlier this year, was seen as another form of possible incentive dangled to extract the investigations from Zelensky.