Schiff admits President Trump has right to fire an Ambassador

'They serve at the pleasure of the President and that is true, says Adam Schiff adding Amb. Yovanovitch did not just piss off corrupt Ukrainians, but also, certain Americans, like Rudy Giuliani.

Marie Yovanovitch delivered a dramatic personal account Friday of her ouster as America’s Ukraine ambassador amid a campaign against her by Trump associates, but the testimony was largely overshadowed by a snowballing fight over a presidential tweet that attacked her record.

In between were tense squabbles among lawmakers over the rules for the impeachment hearing proceedings, with Rep. Jim Jordan, R-Ohio, at one point snapping at House Intelligence Committee Chairman Adam Schiff, D-Calif., that his party's "indulgence with you wore out a long time ago."

And Republicans were able to extract some noteworthy statements from the witness, including an admission that despite allegations President Trump withheld support to Ukraine in exchange for politically advantageous investigations, it was Trump – not his predecessor, Barack Obama – who ultimately provided “defensive lethal aid” to Kiev.

But while Yovanovitch testified that she was “kneecapped” by the administration – with some choice words for Trump attorney Rudy Giuliani – and Democrats sought to draw attention to what they called the “smear campaign” against her, the day in Washington largely turned on the early-morning Trump tweets. Shortly after the hearing began, Trump fired back in real time, claiming that every place Yovanovitch worked "turned bad."

He charged: “She started off in Somalia, how did that go? Then fast forward to Ukraine, where the new Ukrainian President spoke unfavorably about her in my second phone call with him. It is a U.S. President’s absolute right to appoint ambassadors.”

Trump’s comments ignited an outcry from Democrats: Schiff read Trump's tweet during the hearing, and called it “witness intimidation.” House Speaker Nancy Pelosi, D-Calif., when asked about the tweet, echoed: "Witness intimidation is a crime."

Yovanovitch told lawmakers, regarding the tweet: "It's very intimidating." Democrats on the sidelines of the hearing crowed that the tweet itself could prompt a new article of impeachment against the president.

But the White House fired back at the claims, with Press Secretary Stephanie Grisham declaring: “The tweet was not witness intimidation, it was simply the President’s opinion, which he is entitled to.” She went on to say, "This is not a trial, it is a partisan political process  - or to put it more accurately, a totally illegitimate, charade stacked against the President. There is less due process in this hearing than any such event in the history of our country. It’s a true disgrace.”

It remains to be seen whether that moment and the fallout from it will fuel Democrats’ impeachment case or fade as a parade of other witnesses appear next week before the same committee. But the incident reflected an escalating political environment, with Democrats eager to turn Trump’s trademark attack-mode against him.

Republicans acknowledged the Trump tweet was not helpful, with one senior GOP source telling Fox News: “We didn’t need that.” But Republicans nevertheless worked to draw out witness statements to support their general argument that no quid pro quo took place because, despite Trump’s conversations, the aid to Ukraine was delivered – after a delay – without the investigations he sought.

THE IMPEACHMENT HEARING WITNESSES: WHO IS MARIE YOVANOVITCH?

Earlier in the hearing, Yovanovitch, a career diplomat who has served both Republican and Democratic presidents, relayed in detail her story of being suddenly recalled by Trump in May, saying she believes Giuliani played a key role in telling people she was not sufficiently supportive of the president.

She argued the efforts against her by the president's allies hindered her work. 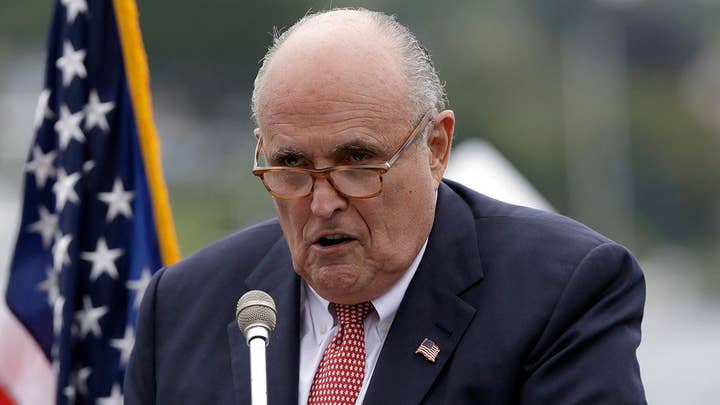 Yovanovitch's removal is one of several events at the center of the impeachment effort.

"These events should concern everyone in this room," Yovanovitch said in her opening remarks. "Shady interests the world over have learned how little it takes to remove an American ambassador who does not give them what they want."

Democrats have worked to connect the circumstances of Yovanovitch’s ouster to Trump’s alleged pressure campaign to enlist Ukrainian President Volodymyr Zelensky in an effort to damage potential 2020 rival Joe Biden.

“Some have argued, that a president has the ability to nominate or remove any ambassador he wants, that they serve at the pleasure of the president. And that is true,” Schiff said. “The question before us is not whether Donald Trump could recall an American ambassador with a stellar reputation for fighting corruption in Ukraine, but why would he want to?”

Republicans portrayed the hearing as a waste of time.

“It’s unfortunate that today, and for most of next week, we will continue engaging in the Democrats’ day-long TV spectacles instead of solving the problems we were all sent to Washington to address,” Ranking Member Devin Nunes, R-Calif., said.

Kayleigh McEnany, Trump campaign press secretary, stressed after the hearing concluded that the president can dismiss an ambassador at any time. “This has been a complete waste of everyone’s time and a disservice to the taxpayers,” she said in a statement. 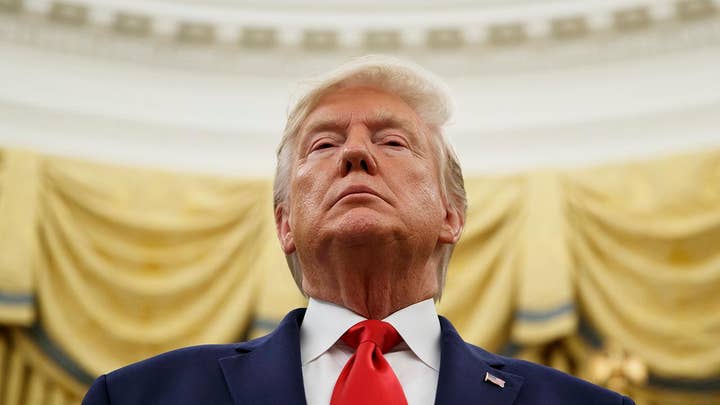 Yovanovitch and others have described Giuliani, Trump’s personal lawyer, as leading what one called an “irregular channel” outside the diplomatic mainstream of U.S.-Ukraine relations. Giuliani and others had claimed Yovanovitch was not supportive of the president and that she had criticized him to others. Trump, in a conversation with Zelensky, referred to her as “bad news.”

Asked on Friday what she thought of those comments from Trump, she said, “I couldn’t believe it. Shocked appalled. Devastated.” She said recent months had been a "difficult time" for her.

Schiff claimed Friday she was "too tough on corruption for some, and her principled stance made her enemies” and it became clear Trump “wanted her gone."

Giuliani also blasted Yovanovich during her testimony, noting that he collected information from “a number of witnesses” about her. In a lengthy statement to Fox News, Giuliani accused Yovanovich, and the U.S. embassy in Ukraine, of “being involved in blatant partisan political activities during the 2016 election.”

“The information I obtained was in the nature of evidence form a number of witnesses. All of them, some allies, some opponents, agreed on Ambassador Yovanovich’s wrongdoing,” Giuliani said, adding that the witnesses “could testify among other things that she blocked Ukrainian witnesses who had evidence of illegal interference in 2016 election from getting visas and coming to the U.S.” 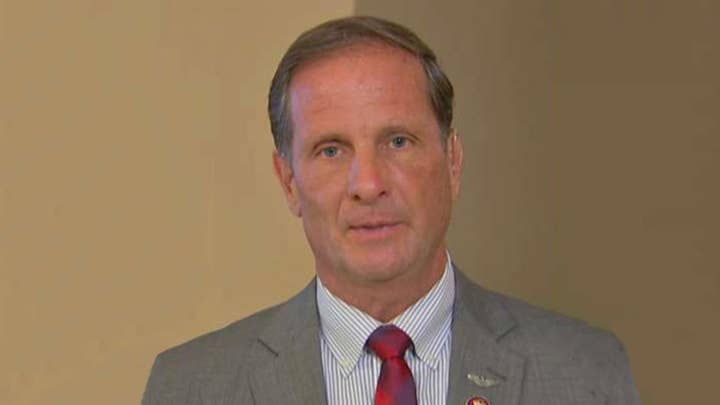 Elsewhere in the hearing, tensions between lawmakers boiled over when Schiff repeatedly shut down GOP Rep. Elise Stefanik, R-N.Y., citing House procedure -- as an astonished Nunes accused him of "gagging" the lawmaker.

The moment began when Nunes yielded the remainder of his allotted time for questions to Stefanik, who had sparred multiple times with Schiff during both days of hearings.

But as Stefanik spoke, Schiff slammed down the gavel: "The gentlewoman will suspend."

"You're gagging the member from New York?" Nunes laughed at one point. 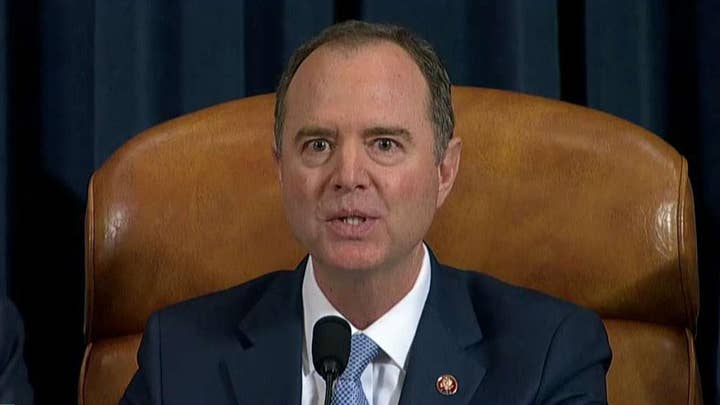 It was one of a number of clashes over the hearing's procedure. Before the testimony began Friday, Schiff shut down Stefanik for the first time after Stefanik asked if he would “continue to prohibit witnesses from answering Republican questions.” Schiff said it wasn’t a “proper” point of order, and then declined to recognize Jordan, who also tried to raise a parliamentary question.

Questioning under GOP counsel Steve Castor also turned to the issue of alleged Ukraine meddling in the 2016 election – namely reports that former DNC consultant Alexandra Chalupa had meetings during the race with officials at the Ukrainian Embassy in Washington to discuss incriminating information about Trump campaign figures.

Yovanovitch said she did not believe she knew Chalupa. Further, when asked if she tried to investigate those interactions, she maintained this would have been handled in the U.S. since the meetings took place in Washington, not in Ukraine. Further, while Ukraine documents eventually were released that were damaging to former Trump campaign boss Paul Manafort, Yovanovitch testified that she still doesn’t have information to suggest any effort to target then-candidate Trump.

At its core, the impeachment inquiry concerns Trump’s July call with Zelensky that first came to attention when an anonymous government whistleblower filed a complaint. In the phone conversation, Trump asked for a “favor,” according to an account provided by the White House. He wanted an investigation of Democrats and 2020 rival Joe Biden. Later, it was revealed that the administration was also withholding military aid from Ukraine, which Democrats have alleged was part of a "quid pro quo" for the investigations.

Republicans continued to push back on that claim on Friday, arguing that the aid was delivered -- after a delay -- without any such investigation. Stefanik specifically asked Yovanovitch about "defensive lethal aid" that she had advocated for. 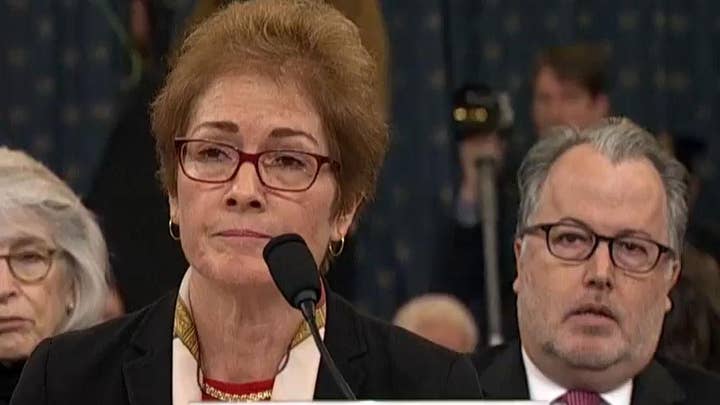 At the same time the hearing began Friday, the White House released a new transcript of the president’s first call with Zelensky, which showed Trump agreeing to meet with Ukraine’s president-elect -- without preconditions -- in the first official phone call between the two leaders.

Nunes read the entire letter in his opening statement. A separate call between the two leaders ignited the impeachment inquiry, and Republicans suggested the new transcript is helpful to the president's argument he did nothing wrong in his conversations with Zelensky. 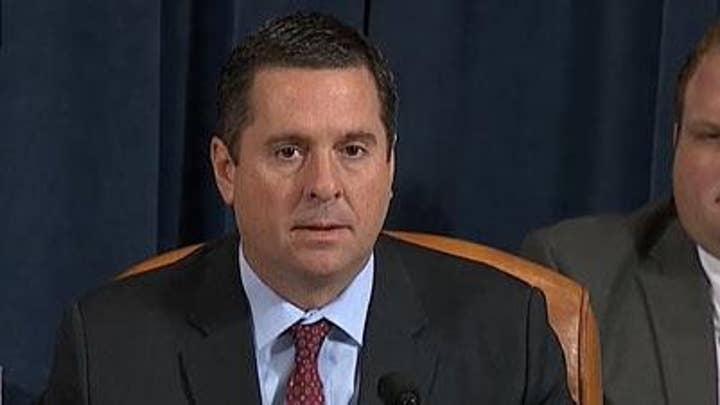 Americans are deeply entrenched in two camps over impeachment, resulting in a mounting political battle that will further test the nation in one of the most polarizing eras of modern times. After the hearing, the Democratic National Committee said that "in removing Yovanovitch, Trump freed himself to commit a gross abuse of power."

"The corruption revealed today, corruption that jeopardized our national security and the integrity of our next election, originated from the person sitting in the Oval Office," DNC War Room Director Adrienne Watson said.

Pelosi on Thursday brushed aside the Latin phrase “quid pro quo” that Democrats have been using to describe Trump’s actions with a more colloquial one: Bribery.

Trump continued to assail the proceedings as “a hoax” on Thursday, and House GOP Leader Kevin McCarthy, R-Calif., dismissed the witness testimony as hearsay, at best second-hand information.

But as the hearing's ending approached, there were signs of drama to come next week. David Holmes, the Ukraine Embassy staffer who reportedly heard a call between E.U. Ambassador Gordon Sondland and Trump that was a highlight of acting Ambassador Bill Taylor's testimony on Wednesday, arrived for a closed-door hearing.

Yovanovitch, meanwhile, received a standing ovation from people in the gallery as she departed the hearing room.