After backlash, online retailer Yandy pulls a sexy costume that references the hit Hulu show that talks about women’s oppression, ‘The Handmaid’s Tale.’

The controversial retailer responsible for some of 2018’s most eyebrow-raising Halloween costumes – including a “Native American Seductress” getup and a “Brave Red Maiden” costume seemingly inspired by “The Handmaid’s Tale” – says all of its items are simply created in “good fun.”

In an interview with Bustle, Pilar Quintana-Williams, the VP of marketing at Yandy.com, claimed that the company never sets out to offend.

"Everything that we do is in good fun," she told the site. "Nothing is ever made to mock or poke any fun."

"The biggest thing we want to put out there is that, you know, we're supporting women and a fun night and they can rock whatever it is they want to rock that day," she added.

FASHION NOVA SLAMMED FOR SELLING 'GEISHA' COSTUME AHEAD OF HALLOWEEN

Yandy has come under fire in the months leading up to Halloween for items including the aforementioned Native American and “Handmaid’s Tale”-inspired costumes, as both drew criticism from the online community.

In the case of the former, critics posted an online petition to get the retailer to remove its skimpy Native American-inspired costumes from sale. As of Monday, nearly 25,000 people had signed the Change.org petition asking Yandy to stop the “sexualization” of the culture.

When asked to comment specifically on these costumes, of which Yandy currently offers dozens, Quintana-Williams said the designs are “never meant to mock” any culture.

“I personally have lived in the Southwest my whole life and a great deal of my inspiration for all my designs comes from that," she told Bustle. 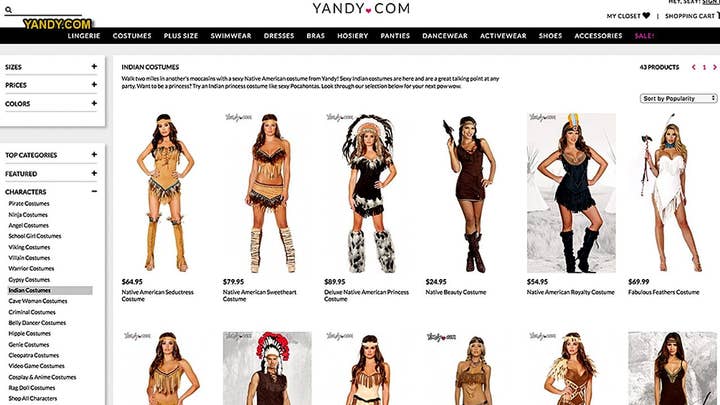 The retailer, however, did remove its “Brave Red Maiden” costume after negative responses on social media.

“Our initial inspiration to create the piece was through witnessing its use in recent months as a powerful protest image,” the company said in a statement in September. “Given the sincere, heartfelt response, supported by numerous personal stories we’ve received, we are removing the costume from our website.”

Yandy also made headlines for selling a costume seemingly inspired by Meghan Markle's wedding gown, albeit much shorter and tighter.

Quintana-Williams, who has been with the company for six years, also told Bustle that the public’s idea of a controversial costume is ever-changing, and that the company wants to make sure it is offering items that women might want to wear.

She added that employees are dreaming up costumes every year, and the more controversial ideas go through an internal review process.

"We're working really hard at supporting women to have a fantastic Halloween each year," Quintana-Williams said.

Yandy sells around a half-million Halloween costumes each year, Bustle notes. The company has not returned previous requests for comment from Fox News.