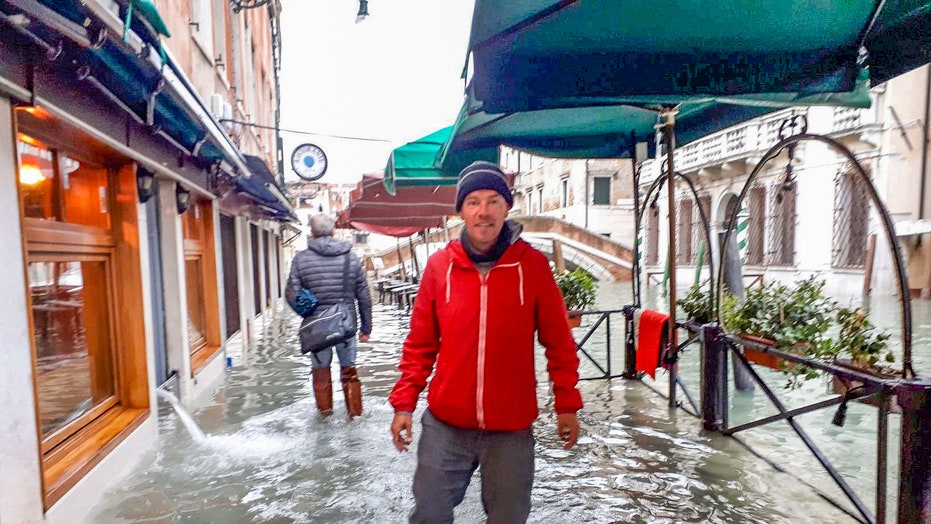 A British couple hoping for a romantic (and dry) stay in Venice is instead battling the worst flooding the historic Italian city has seen in more than 50 years.

Elizabeth Dale and her partner, Richard Williams, met in Venice this week for a short getaway. The pair hadn’t seen each other in two months because Williams is currently completing a cycling trip across Europe, but stopped in Venice so the pair could meet up.

“The first day it rained a lot but nothing too dramatic,” Dale, of Cornwall, told SWNS, a British news agency.

Richard Williams and his partner Elizabeth Dale planned to meet in Venice for a short getaway — amid the worst flooding the historic Italian city has seen in more than 50 years. (SWNS)

But soon after, the weather conditions drastically changed.

"Later we went out for dinner. When we went to leave, the water was very deep and had risen within 15 or 20 minutes,” continued Dale.

The next morning, the two "got up and went to St. Mark’s Square and they had the planking out as the water was quite deep," she added. "I struggled to get around as I only had short [rain boots] and I thought I was being sensible bringing them.”

The historic squares of Venice were left deep underwater on Wednesday after most of the tourist mecca was inundated by the second-highest levels of flooding ever recorded. (SWNS)

But despite the soaked conditions, the people of Venice are seemingly indifferent, said Dale.

“The Venetians are stoic about it. People are prepared but the problem at the moment is that they can’t pump out the water quick enough,” she said. "The water is inside shops now and the Venetians are wearing thigh-high waders. I’m jealous."

Couple Elizabeth Dale and partner Richard Williams have been caught up in the historic flooding in Venice, claiming the waters had risen at a very fast rate. (SWNS)

The historic squares of Venice were left deep underwater on Wednesday after most of the tourist mecca was inundated by the second-highest levels of flooding ever recorded, sending water into the historic basilica as more bad weather is in the forecast.

The high tide peaked at 74 inches late Tuesday, just short of the 76 inches set during record flooding of 1966. That meant more than 85 percent of the city was flooded, with water overtaking the famed St. Mark's Basilica, raising new concerns over damage to the mosaics and other artworks.

"Venice is on its knees," Mayor Luigi Brugnaro said on Twitter. "St. Mark's Basilica has sustained serious damage like the entire city and its islands."