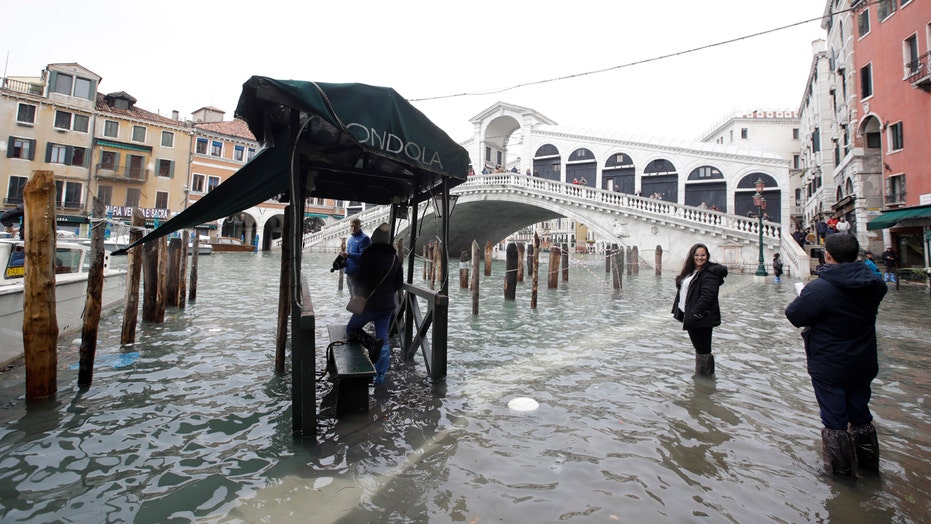 The historic squares of Venice were left deep underwater on Wednesday after most of the tourist mecca was inundated by the second-highest levels of flooding ever recorded, sending water into the historic basilica as more bad weather is in the forecast.

The high tide peaked at 74 inches late Tuesday, just short of the 76 inches set during record flooding of 1966. That meant more than 85 percent of the city was flooded, with water overtaking the famed St. Mark's Basilica, raising new concerns over damage to the mosaics and other artworks.

"Venice is on its knees," Mayor Luigi Brugnaro said on Twitter. "St. Mark's Basilica has sustained serious damage like the entire city and its islands."

People walk on catwalk set up on the occasion of a high tide, in a flooded Venice, Italy, Tuesday, Nov. 12, 2019. (AP Photo/Luca Bruno)

The electrical system at La Fenice theater was deactivated after waters entered the service area, and firefighters brought under control a blaze in the Ca' Pesaro modern art gallery, caused by a short circuit. Officials said a second exceptional high tide of 63 inches was recorded at midmorning Wednesday but was quickly receding.

Brugnaro, who described the situation as dramatic, said he would declare a disaster zone and ask the government to call a state of emergency.

“We ask the government to help us. The cost will be high. This is the result of climate change,” he said on Twitter.

Saint Mark’s Square was submerged by more than three feet of water, while the adjacent Saint Mark’s Basilica was flooded for the sixth time in 1,200 years -- but the fourth in the last 20, according to Reuters.

The extent of the damage to the historic church was not yet known, but when it flooded in 2018 its administrator said it had aged 20 years in a single day.

Elsewhere in the region, a man in his 70s died on the barrier island of Pellestrina after he was struck by lightning while using an electric water pump, the fire brigade said. Danny Carrella, an official on the island of 3,500 inhabitants told the Associated Press the situation there remained dramatic, with more than 3 feet of water still present due to broken pumps.

Visitors in Venice were forced to make their way along temporary platforms above the floodwaters, while others sloshed through the murky waters to get their photos at the tourist landmarks.

Cafes, stores, and other businesses were inundated by high water and nursery schools were closed as a precaution, Sky News reported.

An overturned catwalk used as a walkway during high water floats in an over flooded St. Mark's Square late Tuesday, Nov. 12, 2019. (Andrea Merola/ANSA via AP)

The head of the Venice hotel association said the damage was enormous, with many hotels losing electricity and lacking pumps to remove water. Videos posted to social media showed water gushing into the entrances to some buildings.

Tourists with ground floor rooms had to be evacuated to higher floors as the waters rose Tuesday night, the association director Claudio Scarpa told ANSA.

Called "Moses," the moveable undersea barriers are meant to limit flooding of the city, caused by southerly winds that push the tide into Venice. But the controversial project opposed by environmentalists concerned about damaging the delicate lagoon eco-system has been delayed by cost overruns and corruption scandals, with no launch date in sight.

Luca Zaia, governor of the Veneto region, told SkyTG24 that the barriers were almost complete, but it wasn't clear if they would work against such flooding that left a scene of “apocalyptic devastation”.

"Despite 5 billion euros underwater, St. Mark's Square certainly wouldn't be secure," Zaia said, referring to one of Venice's lowest points that flood when there is an inundation of 31.5 inches.

Across the Adriatic Sea, heavy storm and sweeping winds also triggered floods in parts of Croatia and Slovenia. In the Croatian town of Split, authorities on Wednesday said that the flooding submerged the basement area of the Roman-era Diocletian's Palace where emergency crews battled to pump out the water.

Slovenia's coastal towns of Piran, Izola and Koper reported that sea levels reached the second-highest point in the last 50 years.