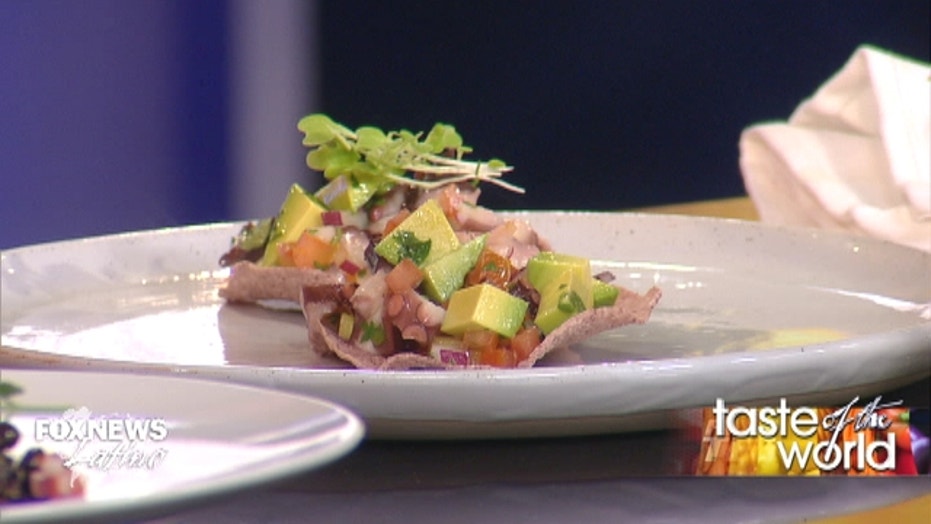 Two dishes perfect for your next Olympics-watching

On Friday night the Olympic torch will be lit in Rio de Janeiro, Brazil, and almost 11,000 athletes will compete for their countries. Families and fans at home will be watching on TV, snacking and rooting for them.

Santiago Gomez, a Mexico City-born chef brings a playful yet sophisticated approach to traditional Mexican cuisine. The 32-year-old spent time at Nobu and worked on various restaurant concepts for Cinbersol, which eventually led to the opening of his Cantina la Numero 20 in Mexico City. Today, he works as executive chef at Cantina la Veinte in Miami, where he lives with his wife, a chef on her own right, Fernanda Alvarez.

“My interest in cooking was sparked while I was working as a delivery man for a local seafood distributor. Delivering seafood to the restaurants gave me the opportunity to meet the best chefs in town and walk around their kitchens. This eventually inspired me to go to culinary school,” Gomez says.

Cantina La Veinte has garnered national acclaim. It was recently featured in Travel+Leisure, where it was mentioned as one of Miami’s most stunning new restaurants. The magazine declared Gomez an “ace young Mexican chef.”

Gomez showed Fox News Latino two simple and fun dishes perfect for enjoying throughout the Olympics. You can find both recipes at HispanicKitchen.com.

The first is avocado and quinoa veggie tartar. This delicious and colorful recipe offers layers of quinoa and avocado, stacked elegantly for an easy, beautiful and healthy dish. It's typically served cold.

Cook the quinoa. Cool and reserve.

Use a 3-inch mold or a PVC tube to assemble the tartare tower one layer at a time.

Start with one layer of avocado, a thin layer of quinoa, a layer of black beans, and a layer of pico de gallo.

Chill in the refrigerator for at least one hour. Remove the ring or tube and serve chilled.

This refreshing octopus ceviche is a decadent salpicón topped on a crispy corn tortilla. It's light, crunchy and delightful. But make sure to cook the octopus before dicing and mixing with the rest of the ingredients!

Directions:
Bring a large pot of water and salt to a boil.

Cook the octopus for two hours or until the meat is tender (approximately 1 hour per lb.) Set aside and allow to cool.

Cut the octopus into small cubes. Mix the octopus with the lemon juice and olive oil. Add salt and all the vegetables.

Top each tostada with the octopus mix.

Enjoy, and good luck to all of the athletes at this year's Rio Olympic Games!