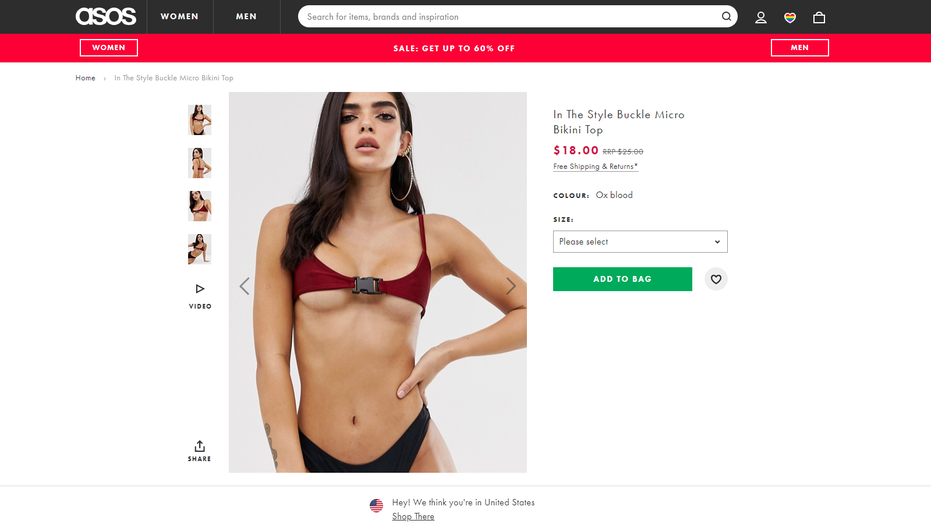 A tiny bikini top has sent the internet into a spin thanks to the confusing nature of the skimpy garment.

The controversial maroon-hued item from ASOS features a thin strap across the bust, held in place with a teeny-tiny buckle.

Yep, you read that right. The fashion e-tailer has combined the extreme "underbust" trend with the baffling buckle one News.com.au first wrote about back in March. In fact, the $18 AUS ($12.30) swimsuit, called “In The Style Buckle Micro Bikini Top,” is so minuscule, it may be a wardrobe malfunction waiting to happen.

The controversial maroon-hued item from ASOS features a thin strap across the bust, held in place with a teeny-tiny buckle. (ASOS)

SUNBURN TATTOOS ARE A PAINFUL WAY TO SHOW OFF YOUR STYLE

But that’s not the only problem — as the extremely daring design has left people scratching their heads, with many declaring it looks as if the bikini top is being worn “back to front."

A parody Instagram account that’s dedicated to mocking “ridiculous” ASOS designs shared a photo of the risky bikini, captioning the image: “When you get dressed (and you’re) still drunk.”

It didn’t take long for social media users to join in roasting the barely-there bikini, with one declaring it looked as if it was on backward.

“When you’re half asleep/drunk and put your bra on back to front...” one teased.

Another wrote: “When you pick up the luggage straps instead of your bra because it’s dark.”

“New trend. Wearing your bra back to front,” someone else mocked.

“When you wear a bumbag/ fanny pack the wrong way,” another agreed.

Others pointed out the tiny garment wouldn’t take up much room in your suitcase, and your tan lines would at least be minimal.

According to the ASOS site, the daring buckle bikini is for “poolside posing only.” meaning you can’t actually wear it in the water. (ASOS)

But some were outraged by the latest viral swimwear piece, writing: “Honestly what the f--- is this.”

“Just because you can doesn’t mean you should," someone else said.

According to the ASOS site, the daring buckle bikini is for “poolside posing only.” meaning you can’t actually wear it in the water — another baffling feature of the swimsuit.

2019 has been the year of the mind-boggling bikinis, with the two-piece designs appearing to get smaller and smaller, often causing outrage and confusion. At the start of the month, Fashion Nova’s tiny “underboob” bikini was roasted by shoppers as well.

This article originally appeared at News.com.au.