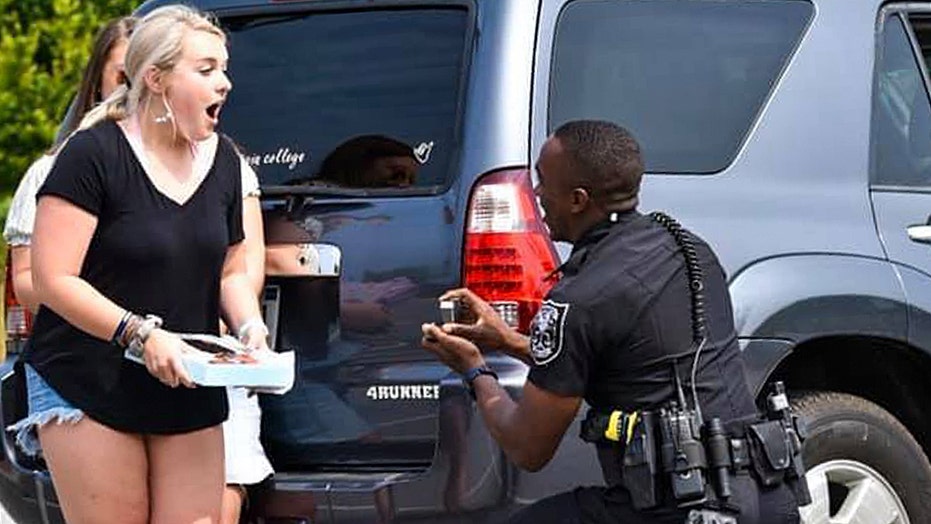 Though the flashing sirens of a police car could make any driver nervous, one Georgia woman’s unexpected traffic stop had a happy ending: a marriage proposal.

On June 5, Alexis McCart was driving with a friend in Lawrenceville when a police officer for the city inexplicably pulled them over, Fox 5 reports.

“I was so nervous; I didn’t know what was going on,” McCart told Gwinnett Daily Post. “Then [the officer] got us out of the car, and I was like, ‘Why is he doing this? What is going on?’”

Little did McCart realize, but her pal and the Lawrenceville Police Department (LPD) were in on a plan to help her boyfriend, Officer John Heart of the DeKalb County Police Department, pop the question.

Moments after being pulled over, Alexis McCart was shocked to see her beau, Officer John Heart, down on one knee. (Gwinnett County Sheriff's Office)

LPD Officer Michael Peterson told the women that authorities were looking for suspects who had been at Walmart and instructed them to get out of the car, the Post reports. The strange orders were part of Heart’s plan, as people don’t normally have to exit their vehicle after getting pulled over.

"I said to myself, 'She'd be really mad at first, but hopefully it'll work out in the end,'" Heart recalled to Fox 5. "It was one of the most nerve-wracking things I've done."

Moments later, McCart was shocked to see her beau – down on one knee.

“I turned around and there he was, and I just started bawling,” she said. “I was in such shock — you can tell by the picture. I literally had no clue.”

"I said to myself, 'She'd be really mad at first, but hopefully it'll work out in the end,'" Heart recalled to Fox 5. "It was one of the most nerve-wracking things I've done."  (Gwinnett County Sheriff's Office)

McCart said yes – and the happy couple couldn’t be more thrilled to tie the knot.

The Gwinnett County Sheriff's Office has since congratulated the pair on Facebook, where the photos of the pre-planned traffic stop and the story of “how he asked” have since gone viral with over 16,000 likes and 3,000 shares.

With plans for a fall wedding, the bride-to-be says that they’re considering an October 4 celebration in a playful nod to police code.

Reps for the sheriff’s office joked that the move would be in “true cop fashion.”