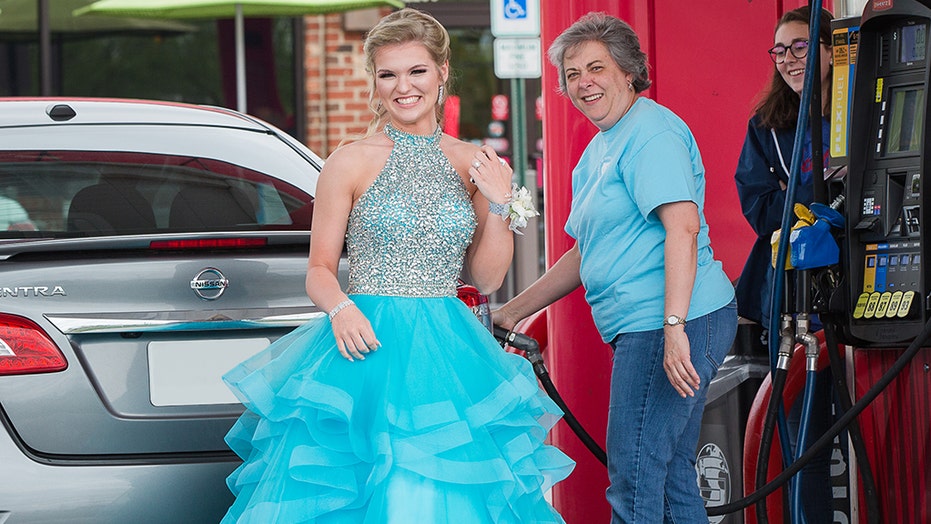 One North Carolina teenager didn’t need Prince Charming when she was surprised with a fairy godmother before prom. A kind stranger helped the young woman pump gas into her car before she drove to the big dance — a gesture all the more appreciated, as the teen had been “ditched” by her date for the night.

A few days before the April prom, Devin Bennett learned that intended date wouldn’t be able to make the event and “kind of ditched” her, she told KGW 8.

Though disappointed, she wasn’t going to miss out on highly anticipated high school bash — or the chance to wear her glittering blue gown.

“I didn’t want to be sad on prom night, so I went with my friends,” the 17-year-old from Winston-Salem told Yahoo Lifestyle.

Devin Bennett and Sherry Allgood, pictured, met at the gas station of a Winston-Salem area Sheetz before the teen went off to the big dance.  (Carolina Charm Photography)

Before heading to the pre-prom party to take photos with her pals, Bennett stopped at a local Sheetz gas station to fill up her tank, with her mom and aunt trailing in a car behind. Hopping out of her vehicle, she was taken aback to hear a stranger call, “No way — Cinderella shouldn’t have to pump her own gas.”

“Here she was with beautiful hair and makeup,” Sherry Allgood, the good Samaritan, recalled to Yahoo. “I didn’t want her getting messed up.’”

“Here she was with beautiful hair and makeup,” the good Samaritan said. “I didn’t want her getting messed up.’” (Carolina Charm Photography)

Allgood took over at the pump, and the two women chatted about the fun prom plans — a kind deed that meant more to the teenager than the woman likely realized.

“It made my day because of the fact that I was going by myself and just having someone to help gave me a little more hope,” Bennett said, as per KGW 8.

Soon parting ways, it wasn’t until weeks later that Bennett learned her aunt, Gena Sykes Turpin of Carolina Charm Photography, took photos of the sweet encounter — inspiring her to search for the woman again.

“I just wanted to say thank you to this sweet lady. I don’t know who she is, but on the day of my daughter’s prom, this sweet lady was having none of letting Devin pump her own gas in her prom dress,” the teen’s mom, Nikki Sykes Bennett, wrote in a community Facebook page last month, in a post that has since been liked over 900 times. “If you know who she is, please pass on our thanks!”

From there, the Bennetts soon reconnected with Allgood, Yahoo reports. According to KGW 8, the teen shared the cute photos with the woman and told Allgood that her kind gesture truly made her night.

Soon parting ways, it wasn’t until weeks later that Bennett learned her aunt took photos of the sweet encounter — inspiring her to search for the woman again. (Carolina Charm Photography)

Incredibly, executives at Sheetz caught wind of the story and gifted both Allgood and Bennett a $2,500 gift card for the gas station on Monday in honor of the “happily ever after,” Fox 8 reports.