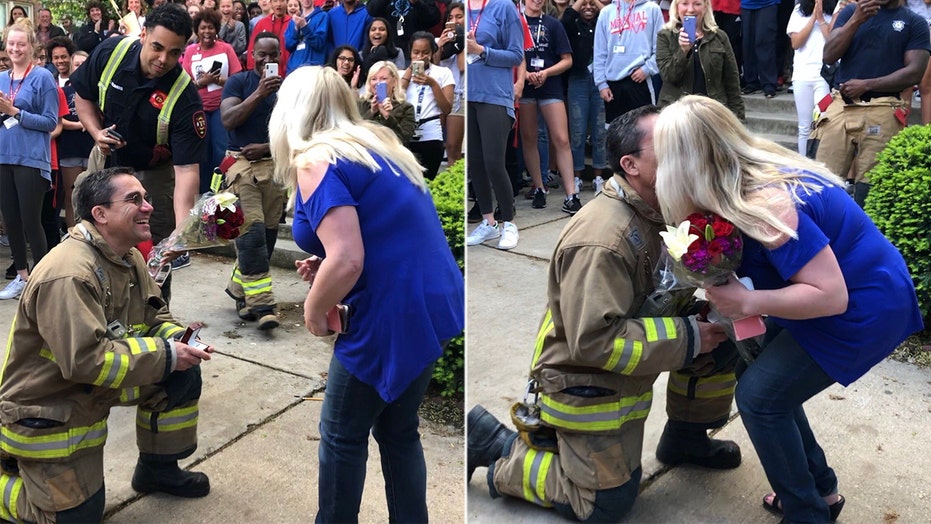 Luckily this surprise proposal didn’t go up in flames.

Social studies and AP human geography teacher at Manual High School, Allison Hunt, was expecting an ordinary fire drill on Friday morning. However, as the Louisville, Ky., teacher escorted her students out of the building, she learned it was going to be anything but.

Hunt said yes in front of students and school staff before heading back in to teach for the rest of the day.<br> (Allison Hunt)

Hunt exited the building to find her boyfriend of two years, Louisville Fire Captain Tom Cecil, pulling up to the school.

Soon after the firefighter arrived, he surprised Hunt by getting down on one knee and asking her to marry him.

Though the pair had discussed marriage before, the fire drill was not planned around Cecil’s proposal.<br> (Allison Hunt)

In photos Hunt shared on Twitter, the mom of two is clearly shocked by the proposal.

Though the pair had discussed marriage before, the fire drill was not planned around Cecil’s proposal.

"He, I guess, switched shifts with a guy to work for him today at the firehouse close to school," Hunt said to the Courier Journal. "Manual already had a fire drill scheduled for today, and so he had coordinated to be a part of that fire drill. I had no clue."

Hunt said yes in front of students and school staff before heading back in to teach for the rest of the day.