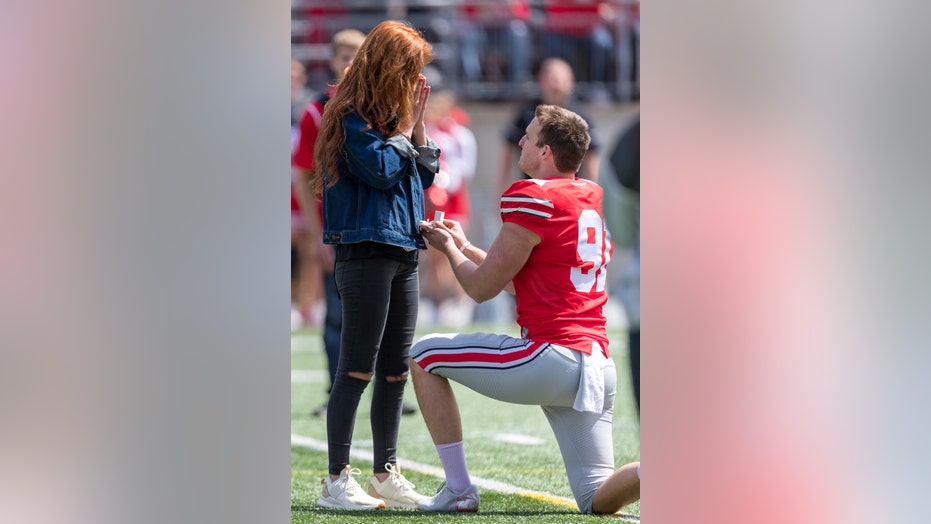 A stadium full of Ohio State Buckeyes fans got a real kick out of punter Drue Chrisman’s latest play.

During halftime at Saturday’s spring game, Chrisman surprised girlfriend Avery Eliason with an on-field marriage proposal while more than 61,000 fans cheered from the stands.

Chrisman had told Eliason that she, along with the girlfriend of former Buckeyes’ kicker Sean Nuernberger, were going to compete in a kicking contest at halftime. But when Chrisman got down to hold the ball for Eliason, he had another idea in mind.

Stopping his girlfriend in her tracks, Chrisman pulled out a ring he hid on the far side of his cleat and proposed. Eliason accepted, and Chrisman’s team soon stormed the field to celebrate.

“Honestly, I think she was more relieved she didn’t have to kick a ball than when she actually got proposed to,” said Chrisman following the proposal, the Columbus Dispatch reported. “It worked out perfectly.”

According to the outlet, Chrisman’s proposal took weeks of planning, as well as the approval of Ohio State’s compliance office. Chrisman’s teammates were also in on the surprise for nearly two weeks, ESPN reported, though they were able to hold their tongues.

“Thank you to everyone who made today possible!” Chrisman later wrote on Twitter. “So grateful my brothers and #BuckeyeNation could be a part of it.”

Chrisman and Eliason have been dating for about a year, the Dispatch reported, but they grew up as neighbors and have known each other since childhood.