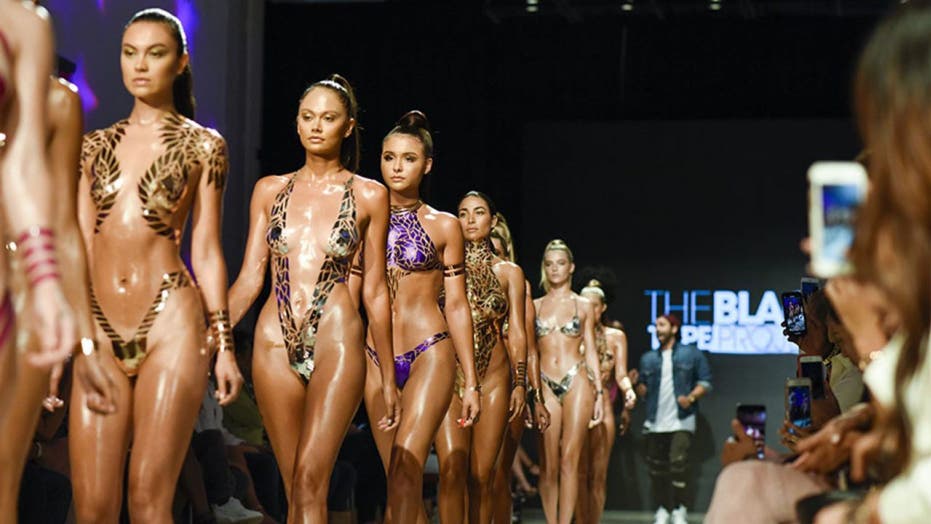 Festivalgoers are known for making daring fashion decisions — but the new craze taking over Coachella may be the riskiest yet.

Instead of simply opting for round sunglasses, feathers, crop tops or graphic T-shirts, some music fans are slapping on stick-on bikinis made of metallic duct-tape as they hit the desert. The "stick-on" swimwear trend has gained attention this month, particularly after models sported colorful and patterned duct tape during the Ultra Festival in Miami.

Miami designer and photographer Joel Alvarez, dubbed the "King of Tape," claims to have come up with the idea to use electrical tape while working with a model in 2008. After receiving positive feedback on the look, he launched an online shop called the Black Tape Project that promotes "alternative fashion" including varieties of metallic tape.

"Although this art project started exclusively with black electrical tape, I had begun to experiment with different techniques and new forms of adhesive tapes," Alvarez explains in the website's bio.

The designs also turned heads during New York Fashion Week and Miami Swim Week in 2018, though Alvarez says the trend has really taken off on Instagram in recent months.

"Festival ready? Get your tape today," the site, which boasts more than 370,000 Instagram followers, posted on Friday, along with a photo of a woman sporting reflective tape at Coachella in California.

The post received more than 10,000 likes and hundreds of comments — with many applauding the woman's unique look.

"Oh wow hands down best outfit of all the fests!!" another exclaimed.

Others, however, voiced some concerns with the stick-on bikini.

"How do they go to the bathroom?" one user asked.

"I wonder how painful it is to remove it..." a second pondered.

"That will hurt," another suggested.

This isn't the only risqué bikini turning heads this year, however.

The sexy two-piece, which is labeled the "Skinny Dipping Clear Strap Micro Triangle Bikini," comes in flesh-colored shades including burnt orange and cream. The bikini bottom, which are sold separately for the same price, showcases one's derrière with its high-cut, thong fit.

Hundreds of people have reviewed the bikini — some complimenting the design with others dubbing it a failure. But the negative feedback seemingly hasn't impacted the brand, as the bikini appeared to run out of several sizes for both tops and bottoms within days of its release.