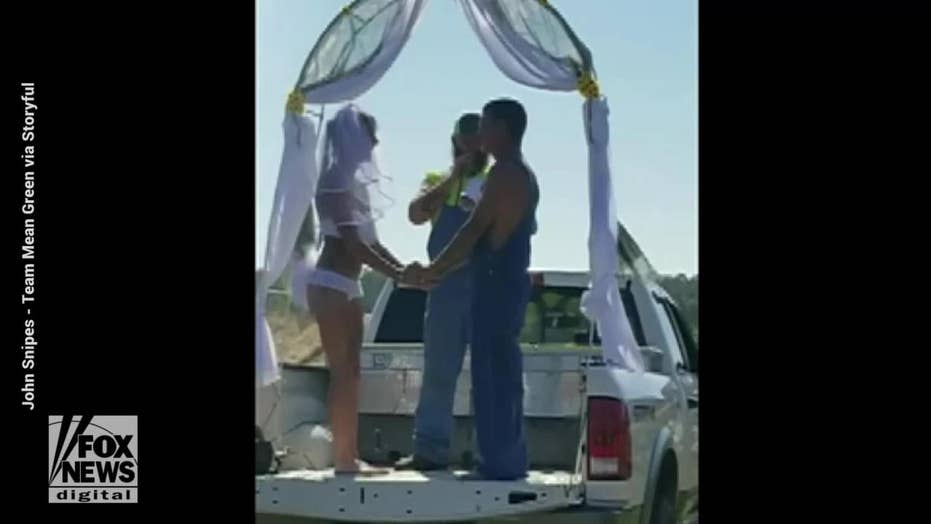 Video: Ahrielle and Jeremy Biddle say 'I do' on the bed of a pickup truck at Florida's Redneck Mud Park

Watch the video of couple Ahrielle and Jeremy Biddle saying 'I do' on the bed of a pickup truck at Florida's Redneck Mud Park.

Who says there’s no such thing as an affordable dream wedding?

A bride and groom in Florida recently exchanged vows on the back of a pickup truck wearing only a swimsuit and a pair of overalls – respectively – during their marriage ceremony last month.

SEE IT: RISQUE 'MOTHER OF THE BRIDE' DRESS GOES VIRAL, GETS MOCKED

Then again, it’s probably a good thing the newlyweds didn’t bother with a dress or a tux, as they promptly headed off for a quick roll in a nearby mud puddle following the nuptials.

After exchanging their vows, Jeremy then carried Ahrielle down to a mud hole and dropped her in before soon joining her for a kiss. (John Snipes, Team Mean Green via Storyful)

The pair, identified as Ahrielle and Jeremy Biddle, held their ceremony at the Redneck Mud Park in Punta Gorda on March 23, according to the Miami Herald.

In footage of their ceremony, Ahrielle and Jeremy’s officiant Aaron Biddle can be seen presiding over the ceremony while the sound of vehicle engines rev loudly in the background.

After exchanging their vows, Jeremy then carried Ahrielle down to a mud hole and dropped her in before soon joining her for a kiss.

The pair soon went viral for their unusual wedding, with some supporters applauding them for the unorthodox idea.

“Haters are gonna hate but I love it! Wish there were more ppl willing to do what THEIR heart desires instead of what the world wants,” wrote one fan on Facebook.

“I love all the attention you two love birds are getting! This is just bada--!!!”. another said.

Ahrielle and Jeremy, meanwhile, are currently raising money for a “redneck honeymoon” on GoFundMe.

“Since our recent redneck wedding has gone viral, I thought I would reach out to our fans to help me give my beautiful bride the honeymoon she deserves,” wrote Jeremy.

“She really wants to go jeeping in the Colorado Rockies. Please help me make her dream come true.”