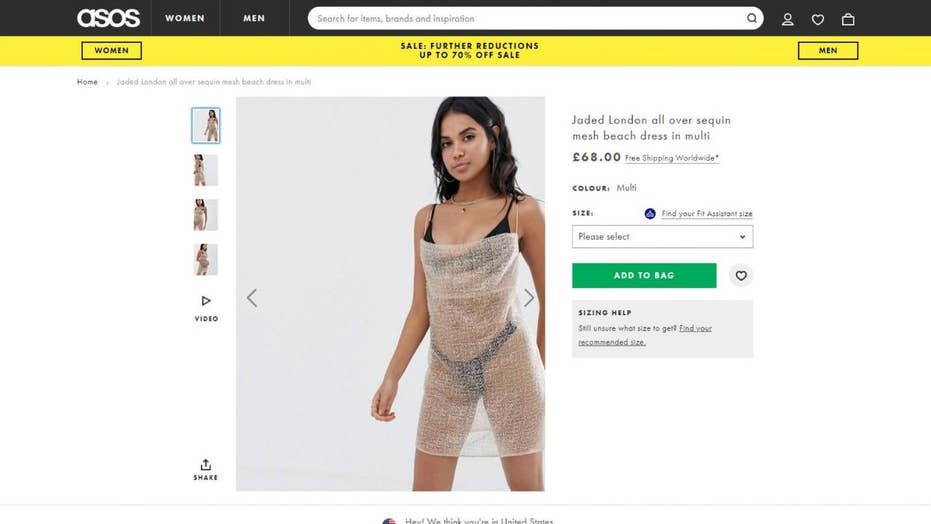 The crop top is making another run as the summer’s hottest trend -- and this season ASOS is bringing men into the mix.

The online retailer is selling numerous crop tops and tube tops for men on the U.K. portion of its site, including a pair of tops that people have mocked on Twitter.

The two tops, from the brand Reclaimed Vintage, were spotted beside each other by a Twitter user named Mike who took a screengrab and simply tweeted: “I give up.”

The “bandeau in black” and “extreme cropped top with long sleeves” both cost 15 pounds (about $19).

ASOS is selling crop tops and tube tops for men this summer, which people have mocked on Twitter. (Screengrab from ASOS).

After Mike’s initial tweet, social media users were quick to ridicule the shirts, with one person commenting that the two shirts look like they could have been one.

“You think it's the new way to charge you twice for the same top... Just cut it in two lol,” one person wrote.

“Its the new thing... IKEA clothing... You have to put it together yourself,” someone else added.

One woman said she would not be happy if her significant other wore one of the shirts, saying, along with two sick emojis: “If my fella walked in wearing that he'd not be long getting walked back out..!!”

Another woman chimed in about other crop tops for men that ASOS is offering.

“@ASOS If I start seeing Men in crop tops this summer I'm done,” she wrote along with screengrabs of the retailer’s crop tops for men.

However, in response to some of the mockery, the retailer tweeted its own response on Friday, saying: “Proudly breaking down fashion norms since 2000.”

One social media user even responded that men have previously worn crop tops in pop culture. The tweet included pictures men in crop tops including Carl Weathers as Apollo Creed in “Rocky III” and Will Smith in “The Fresh Prince of Bel Air.”

“I'm baffled by the ignorance of some comments... men used to wear crop tops in the 80's and it was totally ok back then but i see some of you tend to have a selective memory when it comes to remembering the past,” the user wrote.

This certainly isn’t the first time ASOS has sparked controversy on social media. In April, the retailer was ridiculed for a see-through mesh dress and in February, the company left those online confused with its “horrific” leg harness trend, which looked like a hybrid of high waist bicycle shorts and a garter belt.