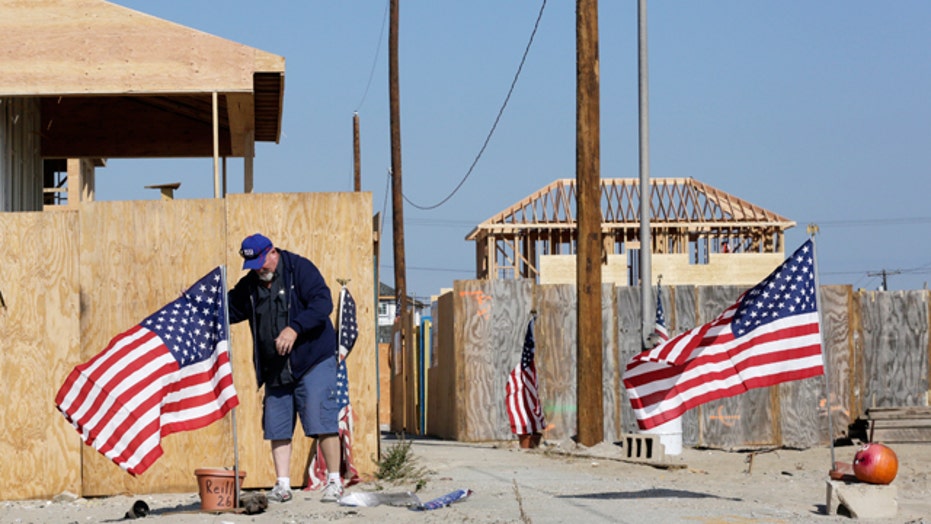 It’s been a year since Superstorm Sandy hit the eastern seaboard, but for some, post-traumatic stress could be just beginning. Fox News’ Julie Banderas talks with trauma expert, Dr. Melissa Earle, for advice on dealing with lasting mental health effects of the storm

When Hurricane Sandy hit the eastern coast of the United States just one year ago, many families in New Jersey and its surrounding states suffered unimaginable losses.  Approximately 147 people died as a result of the storm, and an estimated 650,000 homes were either completely destroyed or damaged by disease-ridden flood waters.

While the flooding eventually receded and some of the badly damaged homes have since been rebuilt, the psychological effects of Hurricane Sandy still remain for many residents on the East Coast.  And with Tuesday, October 29 marking the one-year anniversary of the superstorm, some people will be reliving the trauma they experienced when the hurricane first hit.

“Coming up on an anniversary of something like a traumatic event can ramp things up and people can feel highly anxious and depressed,” Dr. Rachel Yehuda, director of the traumatic stress studies division at the Mount Sinai School of Medicine in New York City, told FoxNews.com.  “It’s a time where there is a natural spike in symptoms, especially on a first year anniversary.”

According to Yehuda, some people who have experienced storm-related trauma, such as the loss of a loved one or the loss of a home, can undergo what is known as an “anniversary reaction.”  Every year on the date of the traumatic event, people may suffer from a resurgence of depressive symptoms and painful memories.  These symptoms can range from mild feelings of distress to significant psychiatric and medical effects.

Though many people will suffer traumatic symptoms related to Hurricane Sandy’s anniversary, Yehuda said these symptoms will most likely be temporary and shouldn’t be a cause for concern.  However, some residents who were impacted by the storm may have been experiencing sustained psychological sufferings throughout the past year, according to Yehuda. For these individuals, getting professional psychiatric help is crucial.

“If people are still grieving, or if (they still have) sustained feelings of depression, it’s time to get some help for that,” Yehuda said.  “In the immediate aftermath of any kind of trauma or tragedy, people may feel they want to talk to someone, but often symptoms resolve in a few weeks or months.  But if symptoms are sustained for a year, that means that a health professional can help the process along by offering skills to reign in the symptoms or figuring out what’s standing in the way of recovery.”

Yehuda noted that the timeline of a person’s trauma symptoms depends on how his or her life has progressed since the traumatic episode.  For some families who were devastated by Hurricane Sandy, the recovery process has been positive and smooth, perhaps with the help of their insurance companies or the clean-up efforts of community volunteers.

However, this hasn’t been the case for many Hurricane Sandy families.  Thousands of residents are still waiting for payouts from their insurance companies or some sort of financial aid from the federal government, in order to help rebuild their homes and get their lives back on track.   And according to latest figures, 26,000 people in New Jersey alone are still out of their homes a year after Sandy.

For families dealing with these constant financial and personal setbacks, moving on from the experience of the storm may be a lot more difficult than it has been for others.

“The psychological state someone is in is very much tied to how life is for them now,” Yehuda said.  “So, have they continued to suffer tremendous losses?…For people who were involved in scarier parts of the ordeal, those who really were at the time experiencing the torrential effects – such as losing their home while they were in it – they may continue to suffer from psychological symptoms such as anxiety and depression.”

“It is very possible that people could still be experiencing some kind of post storm reaction even a year later,” said Earle, who serves as the associate dean for administration and program initiatives at Touro College Graduate School of Social Work in New York City.

Through the support of Dr. Steven Huberman, dean of Touro College, Earle and her colleagues were able to bring their social work from the classroom to the community, serving in the immediate wake of Hurricane Sandy.

She said for children, the anniversary of the storm can be especially unsettling. Experts say kids may be fearful of another storm and worried for their safety. But Earle said children can get over this type of event rapidly.

“The reaction of parents and loved ones to a child’s fear or reaction to a traumatic event, is the primary way of helping them get over it,” she said. “It’s important for parents to feel comfortable enough with addressing it with their children, take time to let it process with them.”

While the Hurricane Sandy anniversary may be a time of grief and anxiety for some East Coast residents, Yehuda noted it can also be a very positive time for the promotion of healing.

“The year anniversary is a great time to reflect on our resilience,” Yehuda said. “People can use the anniversary to look back and see how much symptom improvement they’ve accomplished.  We don’t congratulate ourselves enough on the amount of success we’ve had coping with adversity.  We do cope well more often than not, and because we get overwhelmed, it’s useful to remind ourselves of times we truly succeeded.”

“Trauma gets better,” Earle said. “We all have the capacity within ourselves to resolve these feelings.”