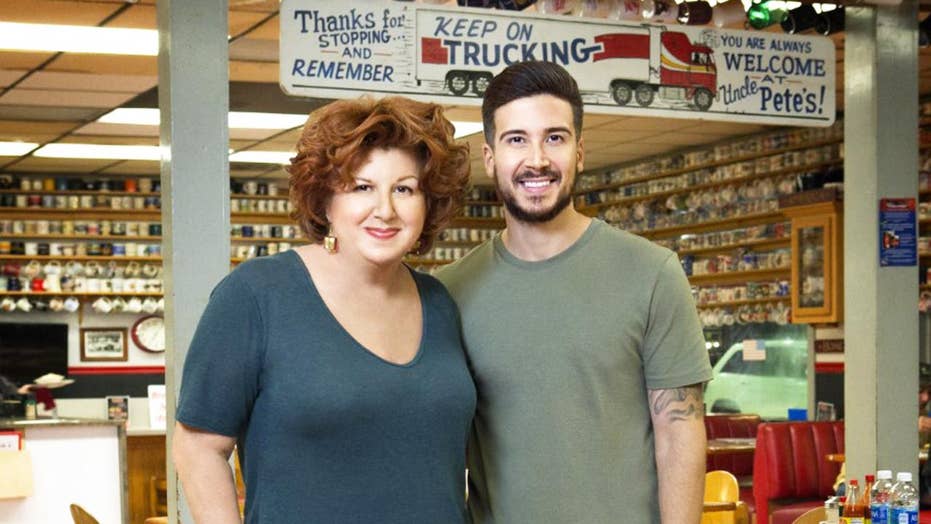 Vinny Guadagnino shows his softer side

As an original member of the hard partying cast of MTV’s hit series "Jersey Shore," Vinny Guadagnino may be better known for drinking rather than eating.

But now, Guadagnino says his party boy days are (almost) totally behind him and he's focusing on taking his career to the next level with a variety of projects.

"Since 'Jersey Shore,' I always took improv classes and sketch comedy classes and I always do that underground and just educate myself," Guadagnino told Fox News. "I'm a huge comedy nerd. I watch every comedy show and I would love to just do something in comedy one day, whatever that is."

The reality star might not be headlining at New York City's famed Comedy Cellar soon but he is boosting his hosting chops on his Cooking Channel series "Vinny & Ma Eat America."

“We always knew that we wanted to do some kind of cooking show ever since everyone saw my mom on ‘Jersey Shore’ bringing in mountains of lasagna and baked ziti,” says Guadagnino.  “People fell in love with her, her personality and her cooking.”

The series follows Vinny and his “Ma”-- Paola-- as they travel across the country on a culinary trip of a lifetime to taste food she’s never tried before.

Guadagnino, who is "100 percent Sicilian," says that although he was raised on traditional Italian foods, he's garnered a big appreciation for many different types of cuisines and will eat anything-- even insect tacos and rocky mountain oysters (that's Colorado code for bull testicles).

Before hitting the road with her son, Ma, on the other hand, had never tried sushi or even ranch dressing.

“Everything is a surprise for my mom. She has never been off of Staten Island," the reality star explained.  "She emigrated here when she was 10 years old from Sicily and she never left."

Throughout the series, the duo travels to several U.S. cities including Austin, Texas; San Francisco and Denver before heading south to Georgia, Nashville, Tenn., and New Orleans, taking in the regional cuisines of each locale.

When he's not filming, the self proclaimed "fat kid at heart" says he sticks to a mostly paleo diet with plenty of lean meats and veggies-- but always appreciates a delicious meal on a cheat day, often indulging in pizza.

And when he's not eating, he's Tweeting.

Guadadgnino is a big fan of “The Bachelor," and live tweets during each episodes for all 3.14 million of his followers to enjoy. He might joke around online, but his obsession with the show is real.

"I plan to have a long career in tweeting 'The Bachelor'," Guadadgnino jokes. "Well I definitely want to be the next Bachelor....but I make fun of the show too much to actually get on 'The Bachelor'."

The Cooking Channel is re-airing all six episodes of "Vinny & Ma Eat America" this Saturday, March 11.