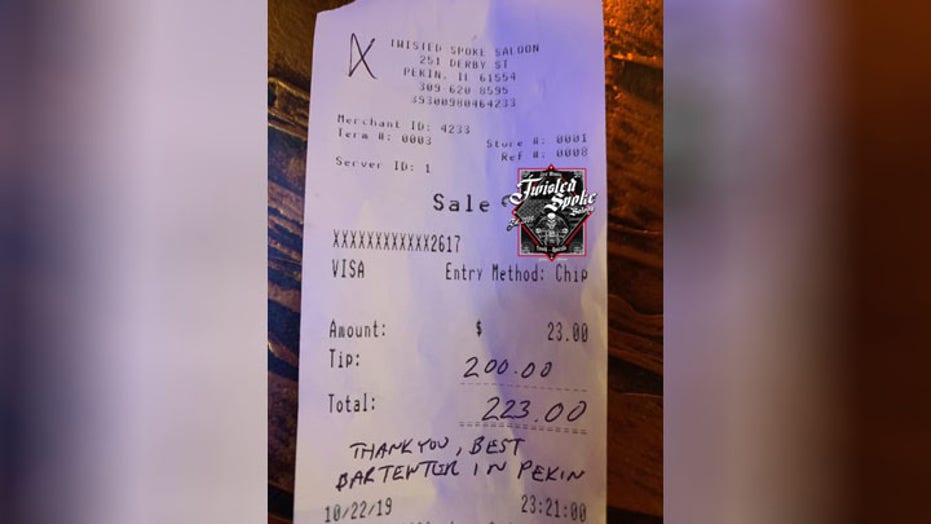 That must have been one heck of a bartender.

A couple in Illinois left what can only be called a monumental tip on a relatively small bill. The amazed owner of the bar shared a photo of the receipt to Facebook, revealing the generous gratuity.

The owner of Twisted Spoke Saloon in Pekin, Ill., posted the picture with the caption: “Come in to do the paperwork from yesterday and see this. Always nice to see someone leave a nice note along with a generous tip.”

The receipt shows that tip giver left $200 on a $23 bill -- a tip a good deal more robust than the customary 20 percent. The receipt also includes a handwritten note that says, “Thank you, best bartender in Pekin.”

The generous gift was left by a married couple who befriended one of the bartenders at the restaurant, Yahoo Lifestyle reports. Ashely Bedwell has reportedly worked at the bar since February and apparently connected with the pair, who were regulars.

The couple reportedly checked to see if Bedwell was working before stopping by the restaurant that evening. They also apparently asked the bartender about a new car she had recently purchased, after her previous car had been totaled.

While this isn’t the biggest tip ever left, it’s a memorable gesture.

In July, Fox News reported that a woman in Florida who left a $5,000 tip had actually been trying to get back at her boyfriend by using his credit card without his knowledge.

Serina Wolfe was arrested and charged with grand theft, Fox 2 Now reports. She made headlines after she left the gigantic tip to a waitress at Clear Sky Café in Clearwater, Fla.

Wolfe was reportedly angry that her boyfriend wouldn’t let her use his credit card to purchase a plane ticket so she could go home to New York. He initially put a hold on the card, but once he lifted it, she used it to leave the newsworthy tip.