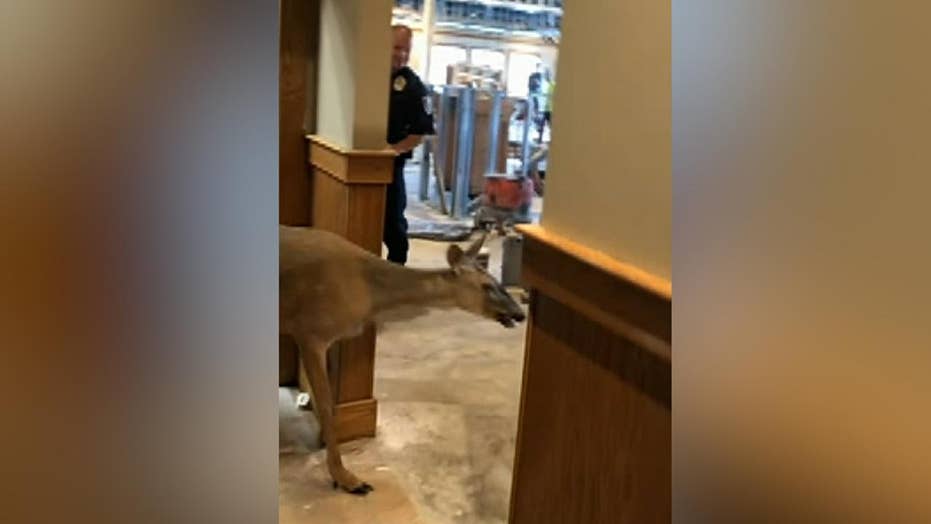 Deer escapes after wandering into restaurant under construction

Raw video: Police officers in Grand Rapids, Minnesota respond to call at a restaurant where a deer wandered inside and caused damage.

A deer was a little overeager to check out a new restaurant in Grand Rapids, Minn., last week.

The Grand Rapids Police Department was called to a restaurant under construction on Tuesday morning to help remove a deer that had wandered inside.

The establishment, located inside a strip mall in the center of Grand Rapids, was in the process of being converted into a taproom when the deer decided to check it out around 10:30 in the morning.

Officer Troy Scott captured the incident on video, which shows the deer nervously running around the area. The animal can be heard knocking things over in the bathroom off camera. According to FOX9, the deer broke glass and mirrors in the bathroom before darting into the main room and leaping over supplies on the floor until it eventually escapes out the front door.

A crew was reportedly working on the building when the deer “just moseyed right in,” Scott said to FOX9.

“I chuckled because [the other officer] was talking to the deer like a dog he was trying to get to leave,” Scott added.

The deer did not appear to be harmed during the incident. It was not reported how much, if any, damage had been done to the property.