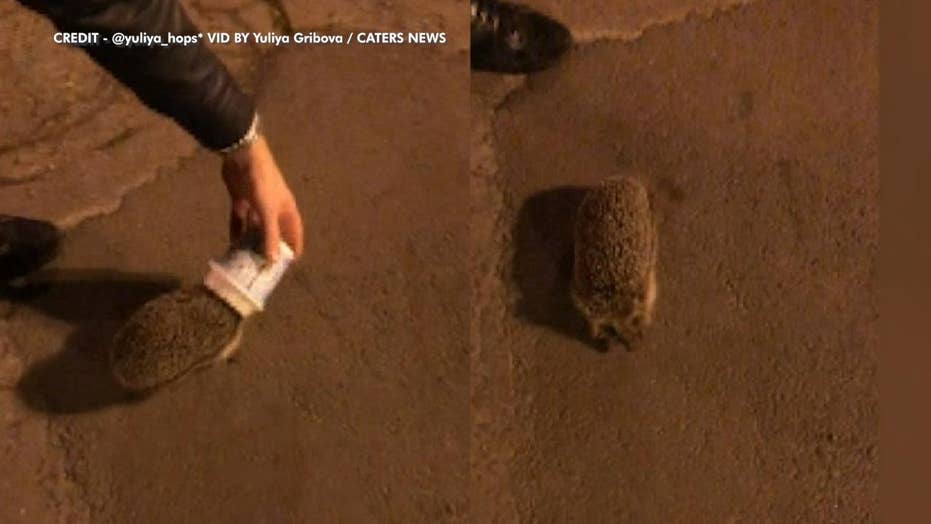 Hedgehogs in Ireland, Russia, are spotted with their heads stuck in frozen treat cups

It’s not quite a troubling trend as of yet — more of a strange coincidence, really — but porcupines in both Ireland and Russia have recently managed to get their heads stuck inside frozen-treat cups, like those used for soft-serve sundaes or milkshakes from fast food restaurants.

Sure, we’re all concerned about turtles getting tangled in plastic six-pack rings, but what about hedgehogs in milkshake cups?

It’s not quite a troubling trend as of yet — more of a strange coincidence, really — but hedgehogs in both Ireland and Russia have recently managed to get their heads stuck inside frozen-treat cups, like those used for soft-serve sundaes or milkshakes from fast food restaurants.

In mid-May, two members of the Gardai in County Donegal, Ireland, observed a hedgehog in a “prickly situation,” filming as it wandered down a street in Raphoe with what appeared to be a cup stuck on its head, per the Irish Post. The detectives eventually “came to the rescue” and removed the cup, as seen in a post shared on the Gardai’s Facebook page, which also urged viewers to dispose of their trash in the proper receptacles.

Funny? Sure. A little concerning for this particular hedgehog? Undoubtedly. But then, only weeks later, the same exact thing happened in Novocherkassk, Russia.

TikTok user Yuliya Gribova shared a video in early June showing yet another hedgehog with its head stuck in yet another frozen-treat cup, this time identified by the Gribova user as being from McDonald’s, Caters News reports. (The cup does indeed appear to be the same that McDonald’s Russia uses for McFlurries.)

In Novocherkassk, Russia, a woman named Yuliya Gribova and her friend observed yet another hedgehog stuck in yet another ice-cream cup. (Yuliya_hops via Caters News)

“Some idiots put this on its face,” said Gribova upon finding the hedgehog, although it was unclear if she knew this to be fact, or if perhaps the hedgehog had gotten stuck of its own accord.

In any case, a friend of Gribova’s removed the cup from the hedgehog’s face. In a follow-up video, she and her friend are seen checking to make sure the hedgehog is fine.

At the moment, the fate of the hedgehogs in the videos is unknown, though it’s not unreasonable to assume that somewhere, somehow, yet another hedgehog is trying to cram its tiny face into a too-small cup, attempting to lap up someone’s melted ice cream. One can only hope this doesn’t turn into a pizza-rat situation, with disoriented hedgehogs suddenly becoming an inexplicable phenomenon across the globe.