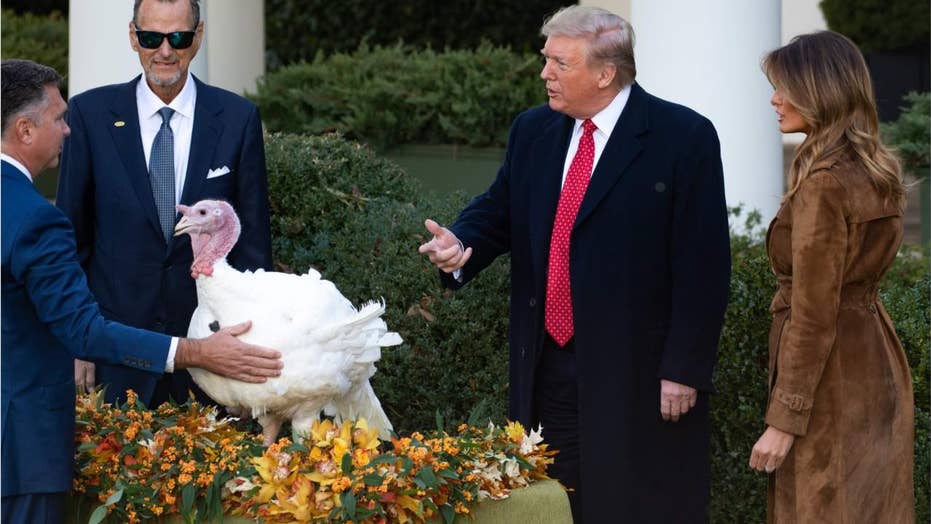 One Florida boy is challenging President Trump to go vegan for the month of January offers. If he does, Million Dollar Vegan will donate $1 million to veterans.

This 9-year-old wants to make a deal with Donald Trump: Go vegan for the month of January, and he’ll donate $1 million dollars to veterans.

The brazen fourth-grader from Melbourne, Fla., made the bold offer Sunday morning in a series of advertisements planted on billboards, television spots and print media.

'REVERSE-EATING CAM' AT NBA GAMES IS GROSSING PEOPLE OUT: 'I CAN'T UNSEE THIS'

“He’s the president of our country, and pretty much everyone wants a healthy president,” Evan, a self-proclaimed vegan and animal-rights activist, told The Post. (His last name is being withheld because of his age.)

And if President Trump doesn’t accept Evan’s offer? That’s a $1 million donation down the drain for veterans. Evan is confident Trump will be able to put his love for fast-food burgers aside for the cause.

“I think that Trump really cares about our veterans [because] they’re the ones who fought and continue to fight for our country,” he said.

The precocious grade-schooler says he chose Trump since he has the power to inspire others.

“If people saw him do this, then everyone would hear about it and say, ‘If President Trump did it, maybe I can do it?’ ” Evan said.

The cash, of course, won’t be put up by Evan himself, but by the nonprofit he’s representing called Million Dollar Vegan, which seeks to fight “climate change with diet change.”

The vegan advocacy group — which was behind a similar stunt earlier this year that challenged Pope Francis to try a plant-based diet for Lent — said they’ll be ready to cash out within one hour if the president agrees on Twitter.

“The donations for this cause are now in escrow,” a press release states. The organization has support from celebs such as Paul McCartney, Moby and Woody Harrelson, and the charitable arm of environmental investment firm Blue Horizon Corporation.

Evan’s ad features the defiant fourth-grader crossing his arms next to a letter he penned to the president.

“Now, I know what you’re thinking,” the letter reads. “Why would I do that? Well, we want to Make America Healthy Again, and a plant-based diet can prevent, treat and even reverse many serious diseases …”

The letter goes on to list illnesses, including heart disease, type 2 diabetes and obesity, which some studies have shown could be mitigated by a plant-based diet.

“It’s really good for your body,” Evan said of the eating lifestyle. “It helps you every day, and you can wake up and feel amazing.”

Despite not being able to eat ice cream, cake or pizza, Evan says he absolutely “loves everything about” being vegan.

Evan went vegan when he was only 5 years old, and has since amassed more than 15,000 followers on his Instagram account, which is run by his mom. He also sells his own vegan-inspired merch, including “powered by plants” and “animal defender” baseball caps on his website.

Veterans, doctors and Olympic women’s track cycling silver medalist Dotsie Bausch all agreed to back Evan’s plea, according to a statement released by Million Dollar Vegan.

“The president is under significant daily stress and would benefit from this diet change,” cardiologist Joel Kahn says in the release.

And if giving up well-done steaks is any worry for Trump, he should rest assured, Evan says.

“As a token of our gratitude, we would be delighted to provide delicious plant-based versions of all your favorite foods for you personally at the White House,” he says.