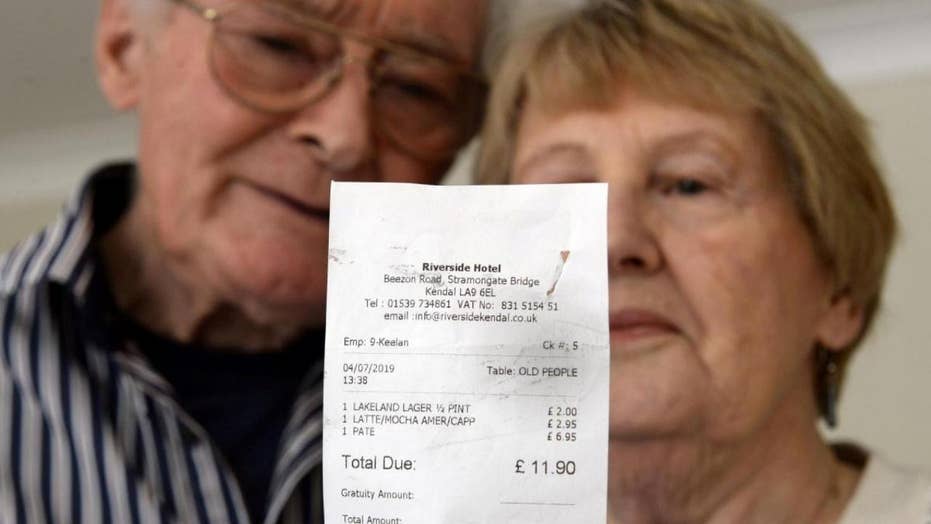 An elderly couple have spoken of their "disgust" after a hotel waiter described them as “old people” on their drinks bill.

Phyllis and Robert Hidden noticed the "terrible" wording on their receipt after enjoying a lunchtime drink and a bite to eat last month.

It's thought the waiter, whose identity isn't known, typed the words in a dreadful attempt to identify who the bill belonged to. (SWNS)

It's thought the waiter, whose identity isn't known, typed the words in an attempt to identify who the bill belonged to.

Hidden, 80, only realized what had happened a few days after her visit to The Riverside Hotel in Kendal, Cumbria, on July 4.

The Riverside Hotel is a three-star establishment which describes itself as "great for families." (SWNS)

"I thought nothing of it at first until my husband pointed it out to me and I was shaking with temper," she said. "I was incensed."

"This is appalling behavior. It's a terrible thing to label people like that," she added.

"It should be table numbers you should be making a note of, not labeling the customers. Age shouldn’t be what defines you."

Hidden called the hotel to raise the issue and told them how "disgusted" she was.

The retiree demanded an apology but didn't get one until a month after her call, which infuriated her further.

She said, "Had I received an apology in the first instance I would have let this go."

Phyllis and Robert Hidden noticed the "terrible" wording on their receipt after enjoying a lunchtime drink and a bite to eat last month. (SWNS)

The couple have now received a letter of apology and the hotel's general manager Jennifer Boow stressed the wording was not intentional.

"The issue has been raised and the member of staff concerned has been spoken to.

"They (member of staff) were extremely apologetic and didn't mean to cause any harm by what happened and no disrespect was intended by the wording."

The Riverside Hotel is a three-star establishment within a converted 17th-century tannery which describes itself as "great for families."