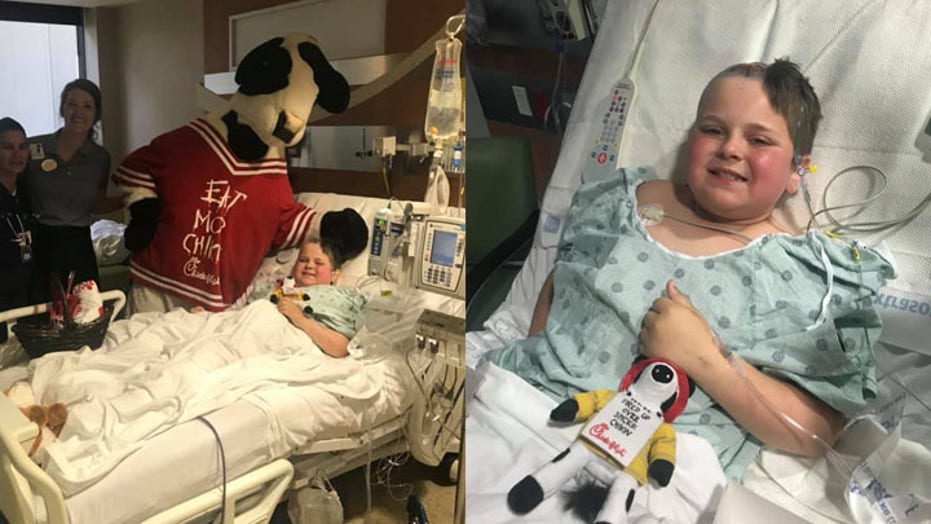 Chick-fil-A might usually be closed on Sundays, but that doesn’t mean they’re not willing to help out a child in need.

Danny Agee, a young boy from Temple, Texas, was scheduled for a brain tumor surgery on the Monday after Easter. The night before the operation, Danny mentioned that he was hungry. When the doctor said he could eat whatever he wanted, he requested one of his favorites: Chick-fil-A.

Unfortunately, the restaurant chain is closed on Sundays, so Danny’s parents informed him that he’d have to make another choice. His nurse, Jenny Pearce, however, wasn’t going to let that stop them. She was able to get in touch with someone at the restaurant, and they made the impossible happen: a Chick-fil-A delivery on a Sunday.

One of the store’s managers made a personal delivery to the hospital, bringing not only nuggets, but also Doodle, the “eat mor chikin” cow mascot. Danny’s amazed father, Joey, shared footage of the visit to Facebook, saying “my son Danny got Nuggets delivered not only on a Sunday, but on Easter Sunday by a manager and the [eat mor chikin] Cow.

"His reaction was priceless! Hugs for everyone.”

"For us, this is not a story about Danny or Chick-fil-A. This is a story about how when you let him, God will work miracles through you and for you," Joey told Fox News. "This is the essence of our story and I think Chick-fil-A would agree. Thanks for taking the time and God Bless. By the way, Danny’s surgery went amazing even though they didn’t remove the tumor and he should be going home very soon."