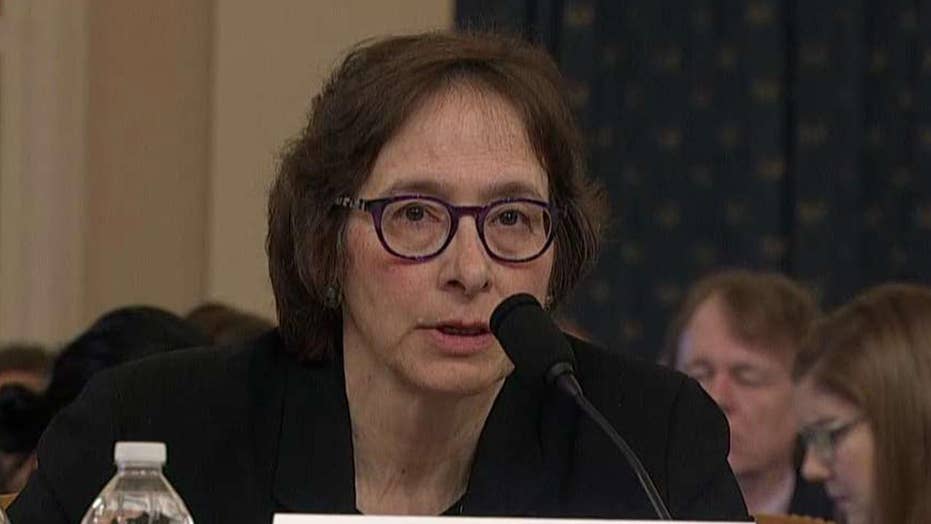 "The View" co-hosts had a spirited debate on Thursday as they discussed whether Stanford Law professor Pamela Karlan acted inappropriately when she made a joke referencing the president's son during the previous day's House Judiciary Committee impeachment hearing.

Karlan received a wave of backlash after she used Barron Trump's name in an attempt to make a point about President Trump's authority. "The Constitution says there can be no titles of nobility, so while the president can name his son Barron, he can’t make him a baron," she said.

"Maybe they missed this part but she was not speaking about the child," co-host Whoopi Goldberg said on Thursday's show. "She was speaking about his name and how it played into what he could not do. He cannot take a title. She was not being disrespectful or nasty."

"You have to have a sense of humor and a lot of these people do not have it," Joy Behar said, apparently referencing Republicans. "But why aren't they concerned about the 70,000 children being held at the border? They're worried about this one child -- who ... he deserves respect and love and affection. He's a lovely kid as far as I can tell."

Behar said Karlan's comments were a "pun" while Goldberg described them as a "play on words."

KELLYANNE CONWAY SLAMS PAMELA KARLAN: 'WHO THE HELL ARE YOU, LADY, TO LOOK DOWN AT HALF OF THE COUNTRY?'

Co-host Abby Huntsman disagreed, calling the professor's comments "pretty sick and a low blow and stupid." Huntsman added that Democrats were continuing to hurt their case against Trump by allowing witnesses like Karlan to make comments that dominated the news cycle.

Hunstman added that she felt Behar used her argument about migrant kids every time she couldn't defend an action taken by the left.

Sunny Hostin agreed with Huntsman, saying that Karlan's comments were "so ill-advised and quite frankly, just dumb for a constitutional scholar during a very important hearing -- an impeachment hearing -- to make a joke about the president's son."

Karlan later apologized and suggested the president should do the same, saying: "I want to apologize for what I said earlier about the president's son. It was wrong of me to do that. I wish the president would apologize, obviously, for the things that he's done that's wrong, but I do regret having said that."