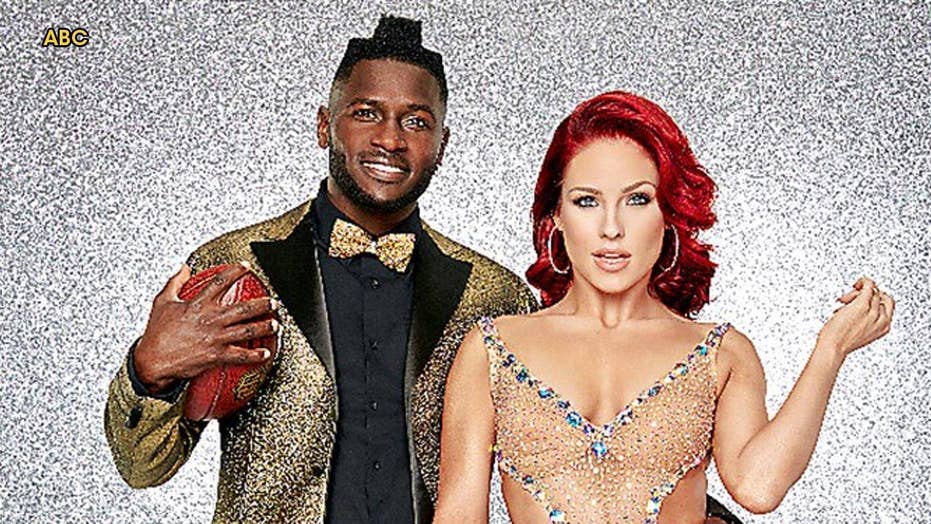 Fox 411: Dancer's top drops waaay too low, ABC has to cover up

"Dancing with the Stars" viewers got an eyeful during Monday night's live show as pro dancer Sharna Burgess had a nip slip.

Burgess' sexy black bustier dress traveled down too far as she performed the tango with NFL star Antonio Brown.

Near the end of the dance, which paid tribute to the Rolling Stones' "Paint it Black", ABC's camera suddenly zoomed away as the accidental exposure became obvious.

They even flashed a "Dancing With the Stars" logo over the entire screen for a couple of seconds.

Host Tom Bergeron then had to interrupt the judges' critique, saying that he was getting an urgent message in his earpiece from a "DWTS" producer.

"They said to me, 'Look at Sharna's top'", Bergeron announced. "I'm only doing the producer's bidding. Pull it up, just a touch, just for the family."

Bergeron stood in front of Burgess so she could adjust herself.

A surprised Burgess laughed, "What?!" then, after she was decent, joked, "Ten!" as she threw up her arms.

"I give it a ten," Bergeron deadpanned.

After getting the judges' feedback, Sharna smiled and held her hand up to her chest as she and Brown proceeded to the skybox. (They got a strong score of 24 out of 30).

Brown and Burgess didn't speak with the press after the show due to rehearsal. However, dancer Lindsay Arnold told FOX411 the wardrobe malfunction was unfortunate—but also an occupational hazard on "DWTS".

"That's a bummer because nobody wants to have that happen on live television," said Arnold, who partners Boyz II Men singer Wanya Morris this season. "But the fact is that it happens sometimes and as pros we have to make sure to get through the dance and not let it affect the celebrity and I'm proud of her for just pushing through it and I mean, it happens. It does. Nothing is going to be perfect and this show is insane. I mean, we are changing [constantly]. Tonight, we each had three different costumes."

Arnold added, "We use tape to keep things in. We do our absolute best."

During the season 16 premiere in 2013, sharp-eyed viewers saw a brief flash as Burgess' costume didn't cover her completely when she listened to the judges with partner Andy Dick.