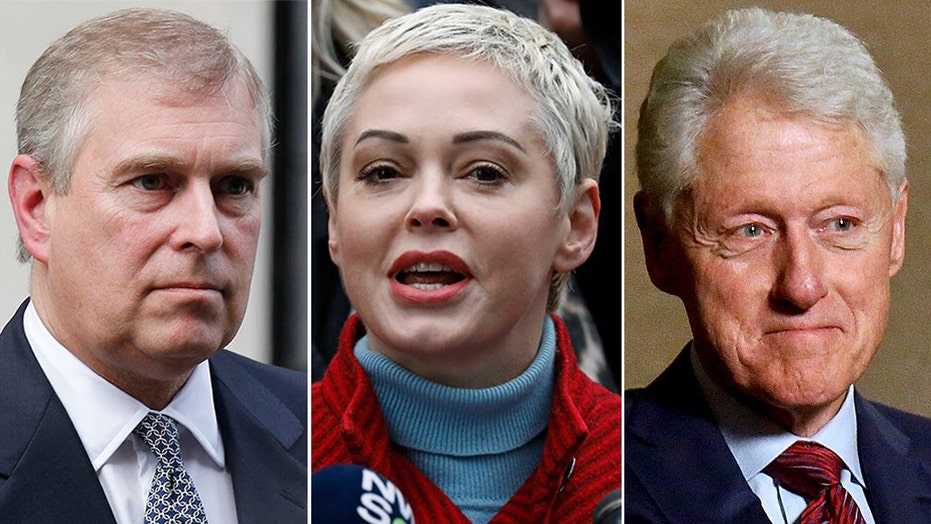 Rose McGowan is calling for Prince Andrew and Bill Clinton to be arrested next for their alleged ties to the late Jeffrey Epstein following the arrest of his alleged sex abuse accomplice Ghislaine Maxwell.

"Now get Bill Clinton and Prince Andrew," McGowan tweeted on Friday, just one day after Maxwell was captured by the FBI and NYPD in a rural New Hampshire town where she was hiding out.

The actress's tweet was accompanied by a photo of Harvey Weinstein, Epstein and Maxwell standing side-by-side with red x's over their faces.

In a six-count indictment unsealed after her arrest, prosecutors allege Maxwell enticed minors to travel to Epstein's multiple residences -- including a multi-story apartment on Manhattan's Upper East Side, his residence in Palm Beach, Fla., and his ranch in Santa Fe, N.M. -- and to Maxwell's house in London.

Following Maxwell's arrest, Audrey Strauss, acting U.S. attorney for the Southern District of New York, said she “would welcome Prince Andrew coming in to talk with us."

WOMAN CLAIMS GHISLAINE MAXWELL RAPED HER '20-30 TIMES'; WILLING TO TESTIFY: 'SHE IS JUST AS EVIL AS JEFFREY EPSTEIN'

“We would like to have the benefit of his statement,” Strauss said.

Sources close to Prince Andrew insisted to Fox News that the British royal has attempted to reach out and offer his assistance.

“The Duke’s team remains bewildered given that we have twice communicated with the DOJ in the last month, and to date, we have no response,” the source claimed.

The 60-year-old's legal team told Fox News on Thursday that they had no comment regarding Maxwell’s arrest.

Maxwell reportedly introduced Epstein to the Duke of York in 1999, The Telegraph reported.

Prince Andrew has denied ever having sex with one of Epstein’s main accusers, Virginia Roberts Giuffre, after she claimed she had sex with the royal three times, including when she was 17.

A longtime tech worker on the Caribbean island claims he once saw Clinton with Epstein in the porch area of Epstein’s villa home – though no one else was with them, according to “Jeffrey Epstein: Filthy Rich,” a new documentary series that begins streaming on Netflix in May.

Previously, Roberts Giuffre – who claims she became Epstein’s “sex slave” at age 17 – said she recalled seeing Clinton on the island, though she said he never acted inappropriately.