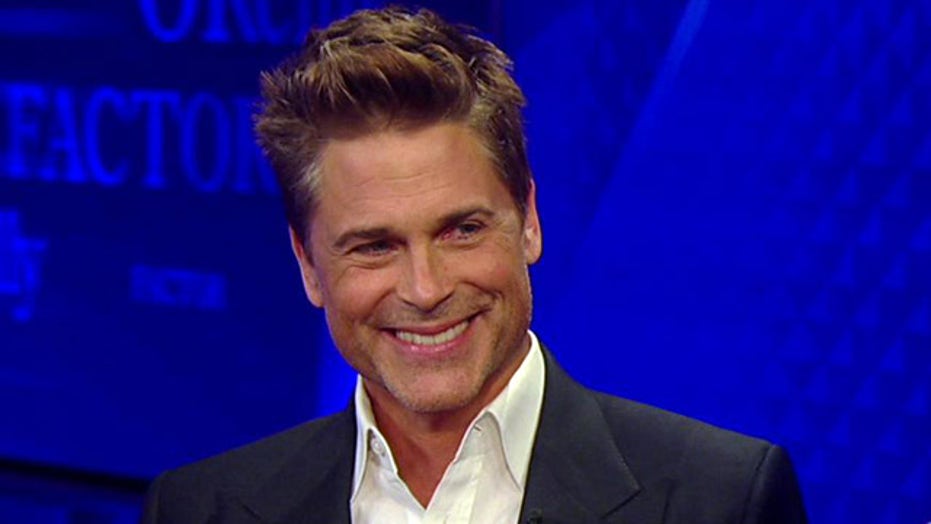 Actor on his new memoir ‘Love Life’, bias against attractive actors and politics

Rob Lowe's first book, “Stories I Only Tell My Friends” came out in 2011 to rave reviews and now the 50-year-old actor has followed it up with "Love Life." It's full of stories from his life dealing with marriage, fatherhood, addiction, sex and of course love. His career has never been better with roles in “Californication,” “Parks and Recreation” and his creepy turn as a plastic surgeon in “Behind the Candelabra.” Lowe, father of two sons, spoke to FOX411 about it all.

FOX411: Your career has been on fire the last few years, like with “Behind the Candelabra.”
Rob Lowe: When all I was getting offered was good looking guys who take their shirts off on page 27 of every script-- that Steven Soderbergh would want me to play that kind of a part, I would have said, “When is that day going to come?”

FOX411: You say you were typecast because of your looks.
Lowe: I've been told, as I'm sure others have been countless times, that the way I look precludes me from playing a cop or a doctor or a regular guy. “A PTA father would never look like that!” Meanwhile I am a PTA father but I've never been precluded from playing an arrogant, rich prick. So what does that tell you?

FOX411: Boy, you really love your wife!
Lowe: I do! I got lucky. I picked well. She's given me amazing boys. She's a special one. We've been married 23 years.

FOX411: Which is like 2,300 years in Hollywood.
Lowe: Yeah it's like the equivalent of dog years. It doesn't feel like a long time but looking back it is a long time.

FOX411: There's a photo in the book of Sheryl visiting you in rehab. You were not a sure bet.
Lowe: Oh, not only was I not a sure bet, honestly one of my best friends at the time, not anymore, as we were walking down the aisle turned to somebody and said, “I give it six months.” Nobody thought it would last. In full disclosure because I think the temptation for people is to have an objectified view of this relationship, is that no one has a perfect relationship. I think when your relationship starts to become imperfect there's a tendency to go, “Oh my relationship is imperfect. I need to start looking for the exits.” It's about how do you live and work through the shortcomings because anyone can be together when it's great.

FOX411: You sort of have an old-fashioned view of marriage.
Lowe: I do, I guess. I believe in ceremony. I think ceremony is important, pomp and circumstance, tradition. I'm into those things. I think there's something about the ceremony of it that says, “This isn't a last minute casual thing.”

FOX411: You were kicked off as the coach from your son's basketball team by other parents.
Lowe: It was an insurrection. It definitely falls under the category no good deed goes unpunished because I took a team that had never been to the playoffs and they won the championship. The parents didn't like my coaching style. By the way, the kids and I loved each other. But it was pushups if you messed up, laps if you weren't paying attention, subbed out of a game immediately if you weren't living up to your potential. The final straw that broke the camel's back was my proclivity for keeping score.

FOX411: Does it drive you nuts, the whole, “everyone's a winner” mentality?
Lowe: Absolutely. It drives me nuts. I said, “It'd be nice to have a little awards ceremony for the kids.” The school said no, “Then we'd have to do that for everybody.” I bought trophies for the kids myself. The school found out about it and said, “You have to buy trophies for the losing teams as well.”

I think it's all emblematic of the same thing. Winners are bad. People shouldn't keep score. It's wrong to strive to be exceptional. I don't get it.

FOX411: You were an ardent Democrat and now you're a registered Independent.
Lowe: First of all, you can vote in an open primary. I don't like being taken for granted anywhere in life. I don't want my vote taken for granted. I'm about the individual not the party.

FOX411: You give a shout out to Maria Shriver in the thank yous and you campaigned for Arnold. You must have been upset by what happened.
Lowe: Every relationship has its complications. I adore Maria. She's a great, loyal and lovely friend of mine. That was a difficult time for everybody.

FOX411: The book is also a love letter to your sons.
Lowe: I was just ready [for fatherhood], and I loved it. It's been the work of my life, and I think it should be the work of any parent's life. My favorite times are times spent with them. My youngest is interested in song writing. He's the youngest intern at the Eli Broad stem cell research lab. My oldest is a history major at Duke.

FOX411: It seems like your career is flourishing because you are so fulfilled personally.
Lowe: Yeah, there are people who say good art comes out of being tortured, but for me having a sanctuary where you can get perspective has been great. You get all the perspective you need when you're coaching sixth grade basketball and you're going on field trips and doing projects which was my pleasure. It was not a sacrifice. It was awesome. The famous basketball trophy ceremony took place on the same night as the Oscars. I remember vividly being at a fairly gross pizza parlor giving these kids their awards while people were getting Academy Awards right above me on the TV screen and I thought, “Man, I worked a long time to get here not there,” and I couldn't have been happier about that.