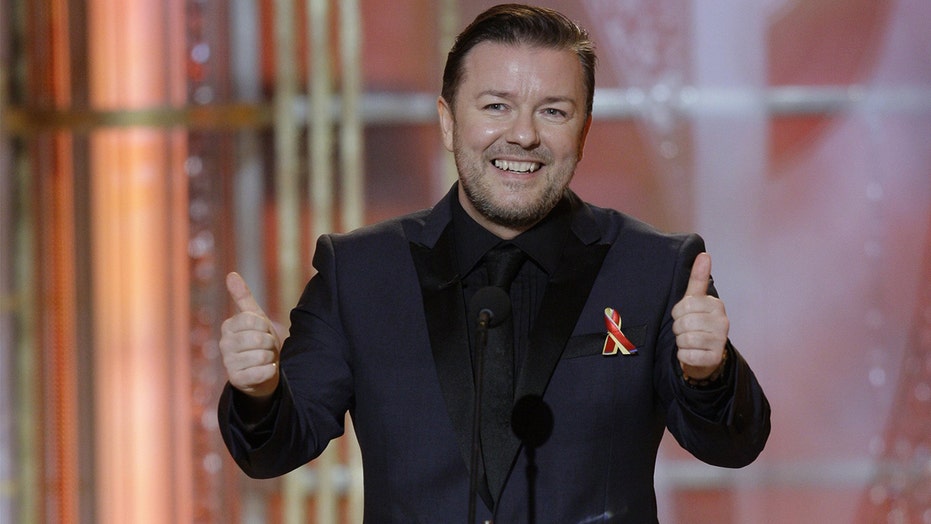 Ricky Gervais is set to host the Golden Globes for the fifth time in January and the first promotional videos have just been released.

Airing during NBC’s coverage of the Macy’s Thanksgiving Day Parade on Thursday, the two short promotional videos show off Gervais in a black tuxedo as he speaks to the camera about hosting the show once again.

GOLDEN GLOBES: RICKY GERVAIS SET TO RETURN AS A HOST FOR FIFTH TIME

Looking dapper in one video, an off-screen voice tells Gervais to “Just say the lines and pour yourself a drink.”

Just as Gervais was about to pour himself a little bit of the bubbly, the comedian looked to the camera and stoically stated, “Hi, I’m Ricky Gervais and I’m hosting the Golden Globes" — before popping the cork and letting the drink spray all over the set.

“Watch out for the camera!” the off-screen voice lamented.

In the other video, Gervais takes a more laid-back stance, but still takes the time to poke fun at hosting the awards show.

“Is it just what you wanted?” Gervais asked with a sly chuckle.

“No, it’s not, is it?” Gervais asked again as he burst into laughter.