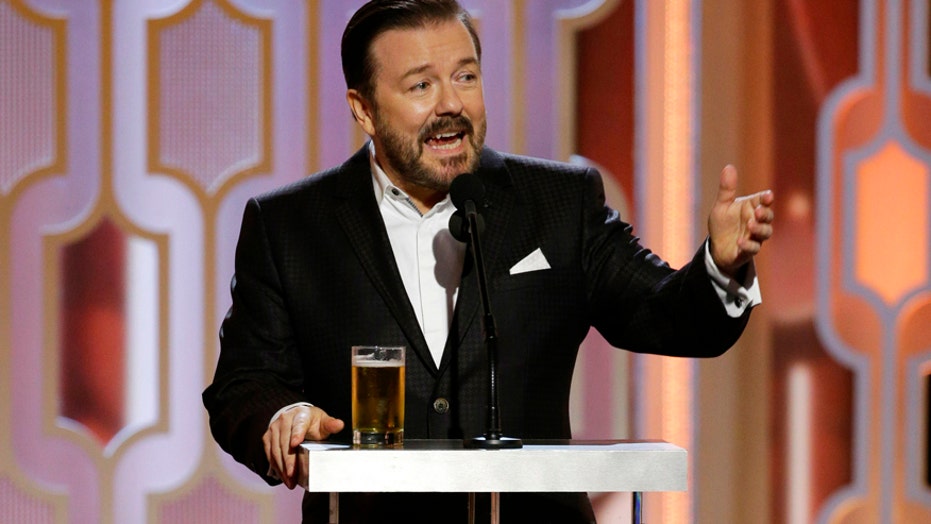 Following the news that controversial comedian Ricky Gervais will host the Golden Globes for the fifth time, the 58-year-old revealed that his jokes will be looked at by a lawyer prior to air.

Gervais made a name for himself as an irreverent show host by pulling no punches when it came to lambasting Hollywood’s biggest stars during previous gigs. Speaking in a recent appearance on “The Graham Norton Show,” “The Office” creator revealed that he’s under a microscope this time around.

“'I never do anything that terrible as it's on network television, but I do have to show my script to a lawyer at the last minute,” he said, via The Daily Mail.

GOLDEN GLOBES: RICKY GERVAIS SET TO RETURN AS A HOST FOR FIFTH TIME

“They don't change anything because I know the law and what I can get away with. I've never libeled anyone, and I've never had a complaint upheld,” he added.

When asked why he goes through the trouble to walk the line of controversy at the highly publicized event, Gervais quipped “It’s no trouble. It’s easy!”

“The first time I did it I thought, 'Shall I do it for the 200 egos in the room or for the 200 million watching at home?' It's no contest, and I try and make it a spectator sport.”

Gervais’ hosting gig at the 77th annual Golden Globes comes at a time when other award shows such as the Oscars and the Emmys opted to run without a host in 2019 after a slew of controversy. In announcing the news, the comedian as much as confirmed that he plans to go in the opposite direction of the other award shows and keep viewers on the edge of their seats.

“Once again, they’ve made me an offer I can’t refuse,” he said, according to Deadline. “But this is the very last time I’m doing this, which could make for a fun evening.”

"There is always a palpable electricity in the room when Ricky takes the Globes stage,” NBC Entertainment chairman Paul Telegdy said at the time. “His return as master of ceremonies at the Golden Globes is much anticipated. It is sure to make for an unexpected evening. We can’t wait to see what he has up his sleeve.”

“When Ricky Gervais is at the helm of the Golden Globes Awards, we can always expect the unexpected,” Hollywood Foreign Press Association chief Lorenzo Soria added. “We’re excited to see it all unfold on January 5!”

Mike Mahan, CEO of dick clark productions, or dcp, also chimed in: “In a world where many award shows are opting to go the no-host route, the Golden Globes are going all in! It’s going to be a great night.”