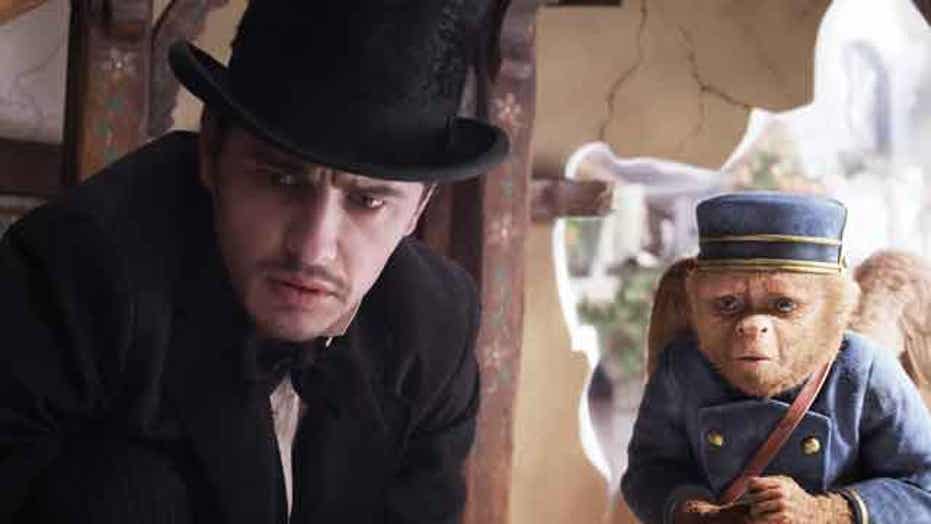 Is 'Oz' great and powerful?

At least this isn’t the wonderful wizard of Oz we all know. Director Sam Raimi follows up his epic Spider-man trilogy with a trip down the yellow brick road with “Oz the Great and Powerful,” and while children may revel in the eye-candy of this famous magical land, everyone else may want to click their shoes and say, "there’s no place like home."

“Oz” suffers from a gluttonous use of CGI and an incredibly weak story, but the biggest problem is James Franco as the titular character.

Great and powerful he is not.

Franco plays every emotion and every reaction with the same goofy grin and dazed, stilted delivery.

Perhaps he couldn’t get past acting with fake CGI characters, or running through a computer-generated environment. For the most part, Franco is a fine actor, and granted he has very little to work with in this film, but when he speaks it feels as if he doesn’t realize what film he’s in. In his defense, the script doesn’t allow him to do much other than be in awe, but when there is some semblance of emotional charge, Franco fails to show it. Whether or not the over-use of CGI is to blame, Franco is miscast.

The story is really simple, as was "The Wizard of Oz." But while the original was brimming with originality and heart, this story is bland and lackluster, despite all the effects telling us this movie is huge! Like the original classic, “Oz” begins in a Kansas seeped in black and white. Franco’s Oz is a conniving, womanizing carnival magician whose shenanigans finally catch up to him. Fleeing his troubles, Oz hops in a hot air balloon, and like Dorothy, gets sucked up a tornado funnel and ends up in the Technicolor Land of Oz.

Once there, Oz learns it has been prophesied that he would arrive and save the land from the evil Wicked Witch. Certainly he has no real magic to save the Ozzies, but when he learns he can keep all the gold in the Emerald City, he finds a way.

A few wacky characters are introduced, but nobody near the caliber of the Tin Man, Lion or Scarecrow. Oz meets an annoying talking monkey wearing a bellhop’s uniform (voiced by Zach Braff), China Girl, a life-like porcelain doll (voiced by Joey King), tinkers, munchkins and flying baboons.

And then there’s the witches played by Rachel Weisz, Michelle Williams and Mila Kunis. Weisz is appropriately cast as Evanora, the protector of the Emerald City, who sends Oz on his way down the yellow brick road to destroy Glinda the Good’s wand. Kunis plays Evanora’s sister Theodora, the naive and lovesick witch who wants to help Oz bring peace and prosperity back to the land and its people – but at what cost? Then there’s Michelle Williams as Glinda, who still hasn’t quite shaken the Marilyn Monroe persona from “My Week with Marilyn.” Every sentence delivered unintentionally feels like a Marilyn enticement or seduction. Probably not the best direction for the character.

The three witches do fight with each other throughout the film, but more for relevance and screen-time than anything else. The three are interesting characters, but their purpose, especially Evanora, will leave you wanting.

Granted the special effects are pretty spectacular, but there is just far too much CGI in this movie. So much time has been used creating the look of Oz that Raimi and company left the characters on the cutting room floor. With paper-thin characters, nobody is worth any emotional involvement.

A major battle between the three witches and the people of Oz, featuring the classic Wizard projection used in the original, is, however, the most impressive and enjoyable scene in the film. If only the scenes before it contained the level of creativity and excitement as this one.

If “Oz” was granted a better story, with characters worth following, as well as a different actor as the wizard, perhaps Sam Raimi’s film could be great and powerful instead of a disappointing miss.