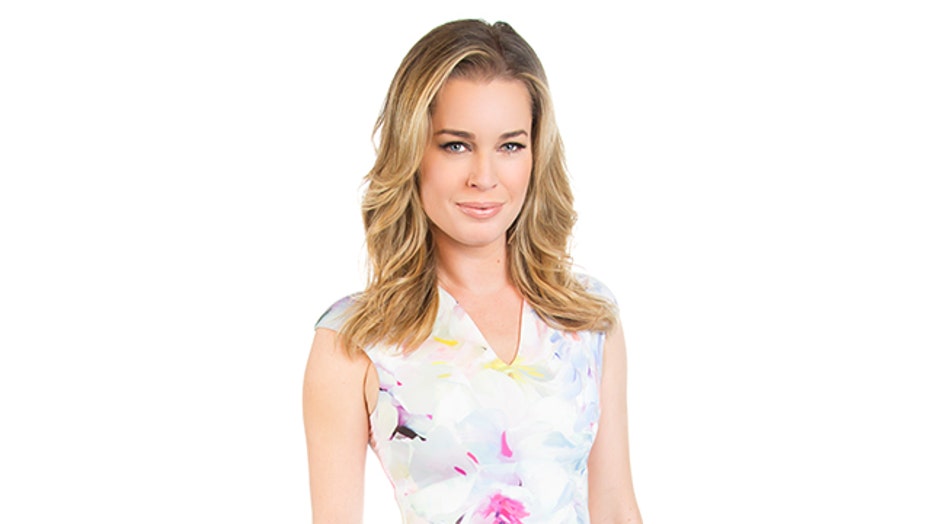 "Skin Wars" host Rebecca Romijn tells us the truth about her body-paint pics from the Sports Illustrated Swimsuit Issue, as well as the funny story behind her "X-Men" makeup.

Rebecca Romijn isn’t worried about getting older in Hollywood.

“I don’t have a huge fear of aging,” the 46-year-old told People magazine in this week’s Beautiful Issue, where she posed with no makeup at all.

“I always thought my mom was so beautiful growing up, no matter how many lines she had on her face,” continued the actress/model. “I admired my mom’s laugh lines. I find peace in that and hope that when my daughters look at me, they do too.”

Romijn shared how she has been able to, over the years, embrace her features with pride.

“I think life is a whole game of acceptance,” she explained to People. “I think when you, especially as you get older, you just have to accept certain things and accepting your looks to a certain extent is part of that, just growing up, maturity.”

This isn’t the first time that the Sports Illustrated Swimsuit cover girl decided to go bare. The star revealed that about 10 years ago, she completed her first no-makeup photo shoot.

“The first time I did it I had brand new twin baby girls and this time around they’re 10 years old and it’s been a lot,” said Romijn. “It feels like a lifetime has passed.”

REBECCA ROMIJN: I FEEL AS SEXY AS EVER

The star added that her 10-year-old daughters Dolly and Charlie, whom she shares with husband Jerry O’Connell, are growing up right before her eyes.

“My girls are just on the cusp of starting to raid my closet,” said Romijn. “They’re just starting to do it. In fact, I’ve started finding some of my things in their room. I’m like, it’s starting already. I can’t believe it."

“One of them wore something to school without asking and came home and it was already ruined,” continued Romijn. “And I was like, ‘This was a test. You failed. You already ruined something I love!’”

Romijn previously opened up to Sports Illustrated about posing in a chainmail bikini for the 1999 Swimsuit issue.

Rebecca Romijn made her mark as a cover girl for Sports Illustrated Swimsuit. — Photo by Ron Galella/WireImage/Getty

“Chainmail bikinis do not offer a lot of support,” said Romijn. “They’re not comfortable to do laps in. But they change your life when you wear them on the cover of Sports Illustrated.”

Still, the pinup had no regrets stripping down for the publication.

“It’s a family,” she insisted about bonding with several Sports Illustrated Swimsuit models. “It really is a family.” “[We’re all] very connected in this funny way.”

Romijn was also the first model to rock bodypaint and nothing else for the magazine.

“That first time and I think hopefully they’ve worked on it since then, but that very first time when I went through it — it was a 12-hour paint job… You can’t really sleep. You have to help out and get into some very awkward positions. You have to stay still in those awkward positions for long periods of time. You get to know your painters very, very well. And they get to know you very, very well. You sort of have to get zen about it. Like you sort of have to leave your body at a certain point before you go nuts. And then, if it’s water-based paint, you do your shot, which takes not nearly as long as it took to paint the masterpiece that’s on your body. And then you go wash it off and it goes down the drain like that.”

Back in 2017, O’Connell joked to Fox News that he’s surprised his marriage to Romijn has lasted for so long.

“I’m as shocked as you,” said the 45-year-old at the time. “And all of our Hollywood friends now just think we’re weird. Like, ‘Why are you guys still together? That’s not how it works.’ We’re like ostracized because we’ve been apparently together for too long.”

When asked what was the secret behind their lasting marriage, O’Connell chimed, “have crazy kids.”

“And then when you have kids, you’re afraid of giving up because one of you is going to be stuck with them. So you have to stay together. No, but what is the secret? I don’t know. Please don’t ask me. That’s what Dr. Phil is for. But I don’t know, we have a really fun home. And it includes all of our dogs. And crazy dogs do keep our house fun.”