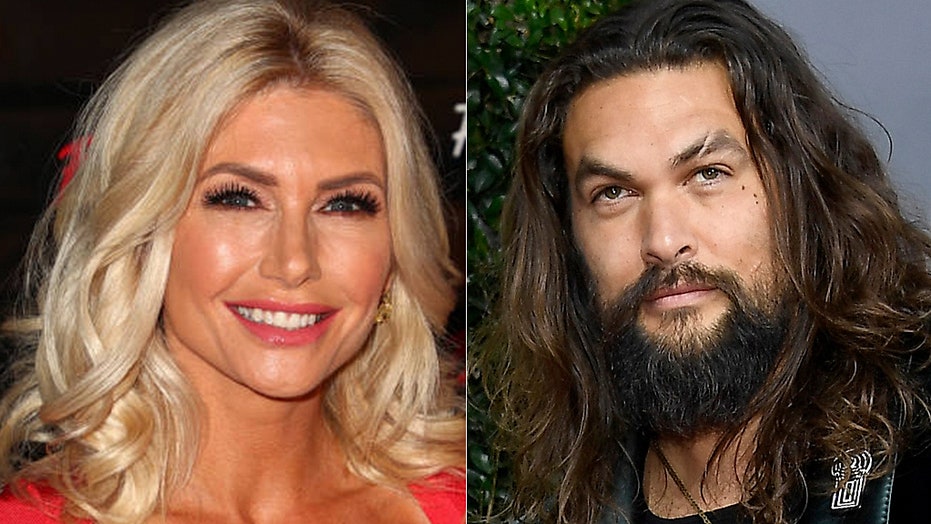 Brande Roderick is returning to her Playmate roots.

The blonde bombshell, who was named after another Playboy model, starred in a pictorial in April 2000, which was shot at a winery near where she grew up in California. Shortly after the photoshoot, Roderick was cast on “Baywatch,” in which she starred from 2000 until 2001. It was also in 2001 when Roderick was chosen as Playmate of the Year.

Playboy Playmate of the Year 2001 Brande Roderick poses with a blow-up of the magazine's cover sporting her image on May 2, 2001, at One51 in New York City. (Photo by Diane L. Cohen/Liaison)

Nearly 800 women have been named Playboy Playmates — with Marilyn Monroe being the first to receive the title — since Hugh Hefner founded the magazine in 1953, People magazine reported. Hefner passed away in 2017 at age 91.

Roderick, 45, spoke to Fox News about starring in “Baywatch” alongside co-star Jason Momoa, being named after a Playboy model, what her family really thought of the images and what her life is like today.

Fox News: Looking back, how did you feel about starring in “Baywatch”?
Brande Roderick: Oh gosh, it was just the best job I’ve ever had. I just remember getting up every morning at 5 a.m., hopping in my car, putting on my Christian rock and driving an hour to work in Hawaii, passing by the pineapple fields and smelling the sweet pineapples.

And then after that, I would get my hair done, makeup then, and then hit the beach where I would hang out with gorgeous guys all day. (Laughs.) It was a dream job. Oh yeah, let’s just frolic in the ocean with Jason Momoa. Show me your "Aquaman" moves. (Laughs.)

Fox News: We take it you had no qualms working alongside Jason Momoa.
Roderick: Oh, he was fun. He’s just the sweetest thing ever. I’m so excited about his success. He’s the sweetest, most humble guy you’ll ever meet.

Fox News: Do you keep in touch with the rest of the “Baywatch” cast?
Roderick: Jason and I just did an autograph signing in Sacramento. It was so great to see him and catch up. Stacy Kamano is one of my best friends. Alicia Rickter, also one of my best friends. Michael Bergin and I have actually done real estate together so I see him quite often. And we just had a "Baywatch" reunion. It was so great to see everyone and just hang out again. It felt we just picked up right where we left off.

Fox News: Your mom was nine months pregnant when she saw a copy of Playboy. What happened?
Roderick: She was more than nine months pregnant. She was walking for miles to her aunt and uncle’s house trying to go into labor. She got to their house, grabbed herself some water and sat on the couch. There was a magazine sitting on the coffee table. She started looking through it and she saw this beautiful woman in there with the name Brande. She already picked out the name Toni for me, but once she saw this woman, she decided to name me Brande and spelled it the same way as the girl in the magazine as well.

Fox News: How were you approached by Playboy?
Roderick: I actually wasn’t approached. I went in and did a test shoot. For me, ever since I was in fifth grade, I wanted to be in the magazine. I had already heard the story of how I got my name many times from my mom. So it was something that I always wanted to do. When I was out in Los Angeles studying acting and doing various TV spots and movies, I went in and tested for Playboy.

Fox News: What do you remember the most about your first photoshoot with them?
Roderick: I remember being a little nervous. I was drinking some champagne to help ease my nerves. (Laughs.) But I was so excited – super excited. I couldn’t believe that I was actually there and doing it. This is something I always wanted.

I was just excited for the new adventure. It was a little nerve-wracking at first, being around a handful of people when you’re naked. And the way that the makeup artist Alexis Vogel worded it is, "You gotta look at them like doctors. They see this every day. No big deal." (Laughs.) And it’s true. They’re not gawking at your body. They’re just doing their job. Nobody cared. It all felt natural for them.

Fox News: What did you think of the images?
Roderick: I thought they were beautiful. They had a great team of makeup artists and photographers that know how to do the right lighting, take the right angles. I was just very proud of them.

I was excited about getting that honor of Playmate, as well as excited about the opportunities that it would bring. Just being a Playmate alone opened more doors for me. It was another step on my ladder in terms of my career and what I wanted to accomplish. I felt being a Playmate of the Month really opened the door for me in terms of getting "Baywatch." And then once I got "Baywatch," I felt that helped me get Playmate of the Year.

Fox News: What did your family think of the photos?
Roderick: My family was super excited. I mean, my mom named me after a Playboy model. (Laughs.) I won’t say they’re very liberal, but they’re open-minded and non-judgmental. My grandmother is awesome. She came to the Playboy Mansion for my Playmate of the Year event. She was enamored of all the animals and the grotto. She had never been in a mansion before. She loved it.

My whole family is just open, wonderful people. I’ve never had judgment in my life from them. I’ve never had parents give me shame or anything like that. And everyone in my town was just so excited. There was a huge party in my town for me. But I grew up in California. So maybe that’s what made the difference.

Fox News: What are some misconceptions you feel people still have about Playmates?
Roderick: I don’t really feel or think there are misconceptions anymore, especially when it comes to Playmates. A lot of them have gone on to be attorneys, mothers, chefs – all these wonderful life paths. Are there misconceptions? I don’t really hear about them. Personally, I’ve haven’t had that experience. Every person I meet thinks it’s the coolest thing. I don’t hear anything negative about it. If anything, it’s all curiosity.

Fox News: What was your impression of Hugh Hefner?
Roderick: He was like a very sweet, loving, good-natured teddy bear. However, he’s an Aries so he’s very smart, strong. If he was upset, you’d know it. One thing that I learned from him is that he was very graceful.

Even when he would have a ton of people lining up in front of him to take a picture with him or shake his hand or just wanting to be around him, he was just so gracious. He was so nice to everybody. He always took the time to say hello, take a picture, shake a hand. I really respected that because not all celebrities are like that.

Fox News: How does it feel to be part of Playboy’s "Equality Issue"?
Roderick: Well, just to be called back and be a part of something after 20 years was quite an honor. I was absolutely elated. And then to find out that it was the "Equality Issue" was even more special. I cried.

Brande Roderick (left) is one of several veteran Playmates to star in Playboy's Equality Issue. The cover story is called 'Once a Playmate, Always a Playmate.' (Photo courtesy of Playboy)

Fox News: What was it like being on set with the other Playmates?
Roderick: It was great being able to catch up with all the other women and hearing how their lives have been. I know most of them since forever. So to find out what they’ve been up to and doing, the excitements, the struggles of their lives. And just knowing that coming back after so many years you have that special sisterhood – one that you will always have. And just knowing that your sisters will always be there for you. It was really nice to see everybody.

Fox News: Hugh Hefner once said, “Once a Playmate, always a Playmate.” What do you think?
Roderick: It’s a great statement! I believe in the statement. It’s a great title to have. There’s no other Playmate of the Year 2001 in the world. So once you’re that, you’re always that. No one can ever take that title away from you. It’s like being an athlete and retiring your jersey. You will always have that number.

Brande Roderick (left) said she was grateful to pose for Playboy again. (Photo courtesy of Playboy)

Fox News: What is life like today?
Roderick: Insane. (Laughs.) I have two small boys, 8 and 9. I do real estate. I also run about six of my own Airbnbs out here in wine country. I’m also producing a reality show about the Airbnbs. It’s a bit crazy between work and kids. It’s like a sport where I’m just running around. And then I’m just trying to have a personal life, which is pretty much non-existent. I think I see my boyfriend maybe once every two weeks.