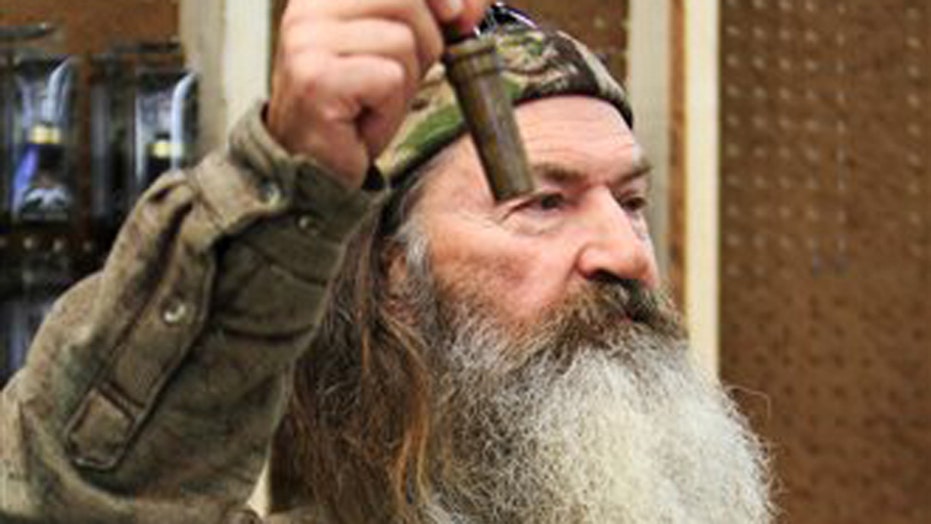 A&E to resume filming with patriarch, family this spring

At the end of the day, Phil Robertson is just “the real deal,” according to his son Willie.

Willie expressed that sentiment via Twitter late Friday after A&E announced they were ending Phil’s suspension from “Duck Dynasty.” The family patriarch came under fire for controversial comments he made about homosexual sex and African Americans and he was swiftly reprimanded by A&E.

“Back to work!!! So proud of all the fans of the show and family,” Willie wrote. “Ole Phil may be a little crude but his heart is good. He's the Real Deal!”

The graphic nature of Phil’s comments caught the attention of many critics, and the advocacy group GLAAD fired back at the reality star almost immediately.

GLAAD quickly released a statement following the announcement of Phil’s return to the show, letting the network and its reality star know that they were none too pleased, and would be watching carefully the show's next steps.

“Phil Robertson should look African-American and gay people in the eyes and hear about the hurtful impact of praising Jim Crow laws and comparing gay people to terrorists," GLAAD said. "If dialogue with Phil is not part of next steps then A&E has chosen profits over African American and gay people – especially its employees and viewers.”

The Robertson clan steered clear of the controversy in an exclusive statement released to FoxNews.com, saying they were "excited to keep making a quality TV show for our dedicated fans, who have showed us wonderful support. We will continue to represent our faith and values in the most positive way through 'Duck Dynasty' and our many projects that we are currently working on. The outpouring of support and prayer has encouraged and emboldened us greatly."

In a statement released late Friday afternoon, A&E explained, “While Phil's comments made in the [GQ] interview reflect his personal views based on his own beliefs, and his own personal journey, he and his family have publicly stated they regret the ‘coarse language’ he used and the misinterpretation of his core beliefs based only on the article. He also made it clear he would ‘never incite or encourage hate.’"

The network added that “’Duck Dynasty’ is not a show about one man's views. It resonates with a large audience because it is a show about family, a family that America has come to love.”

“Duck Dynasty” is a huge money making enterprise for A&E which is co-owned by Walt Disney Co. and Hearst Corp. According to Forbes magazine the show has generated $400 million in merchandise sales and $80 million in ad sales for the first nine months of this year.
The show is on hiatus until Jan. 15, and the network has said that nine of next season's 10 episodes have already been filmed.