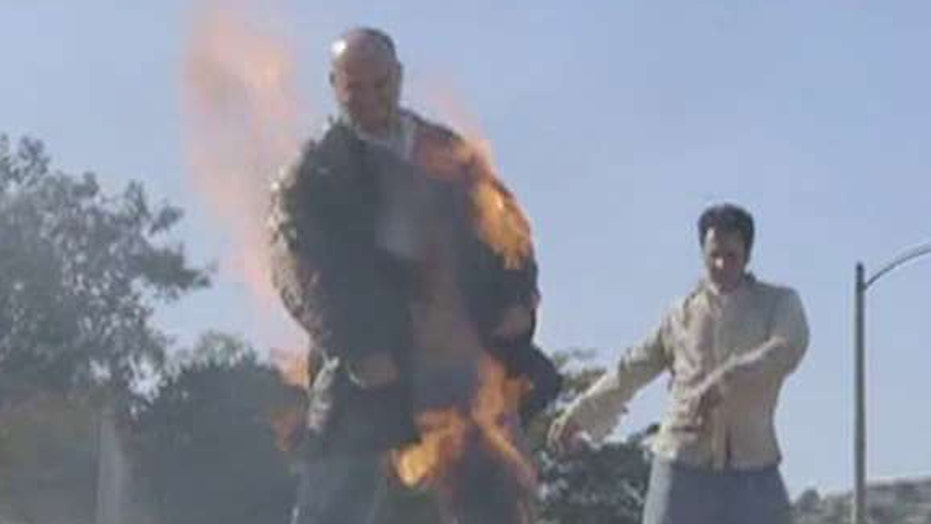 The latest zombie apocalypse movie comes from an unusual source — military veterans with little to no filmmaking experience. But the official trailer for “Range 15” is already approaching 5 million views on Facebook, a month ahead of the military comedy’s release.

Social media and crowdsourcing have helped the film’s creators tap into a loyal and enthusiastic fan base among the veteran community.

“We started an Indiegogo campaign with the goal of raising $350,000 to supplement funds that we had raised ourselves, as well as some sponsors,” producer Nick Palmisciano told FoxNews.com. “Over the course of a couple months, we ended up raising $1.2 million.”

“Range 15” gets its name from two veteran-owned apparel companies. Palmisciano is CEO of Ranger Up. The film’s co-producer Mat Best is CEO of Article 15.

“We are competitors. But the thing about the military community is we’re also friends,” Palmisciano said. “And because of that, we came to the conclusion that we could both make a movie separately, but that movie would not be anywhere near as good as what we could do together. And it’s been a perfect fit.”

Aside from cameos by William Shatner and a handful of other Hollywood stars, the majority of the film’s cast and crew are military vets. Some lost limbs in combat.

“The civilian crew were surprised because actors typically show up, do their lines and then go sit in their trailer until it’s time to do the next thing,” Palmisciano said. “We were running around carrying equipment, trying to help out, driving trucks, doing whatever was necessary because that’s just the way we are.”

With no shortage of fake blood, foul language and “politically incorrect” humor, “Range 15” is not intended for family audiences. Nor do the film’s producers have any delusions of a Hollywood blockbuster. Advance online ticket sales will determine which theaters show the movie and for how long.

“Our goal is a cult classic. We would very much like to deliver the ‘Super Troopers' for the military," Palmsiciano said, referring to the low budget 2001 crime comedy.

But behind the film’s wacky antics are some serious messages. Palmisciano said he hopes the successful production of “Range 15” will inspire other veterans to pursue their dreams in civilian life. He also wants to challenge popular Hollywood stereotypes of veterans.

“It’s either, ‘Those poor veterans. They’re broken and they went to war,’” Palmisciano said. “And then the other side, where veterans are these godlike creatures that are supposed to be just loved and doted upon. And neither of those things is true. We’re a cross section of society. We’re regular people that chose to serve their nation. And that’s really what we want to be treated like — regular people.”