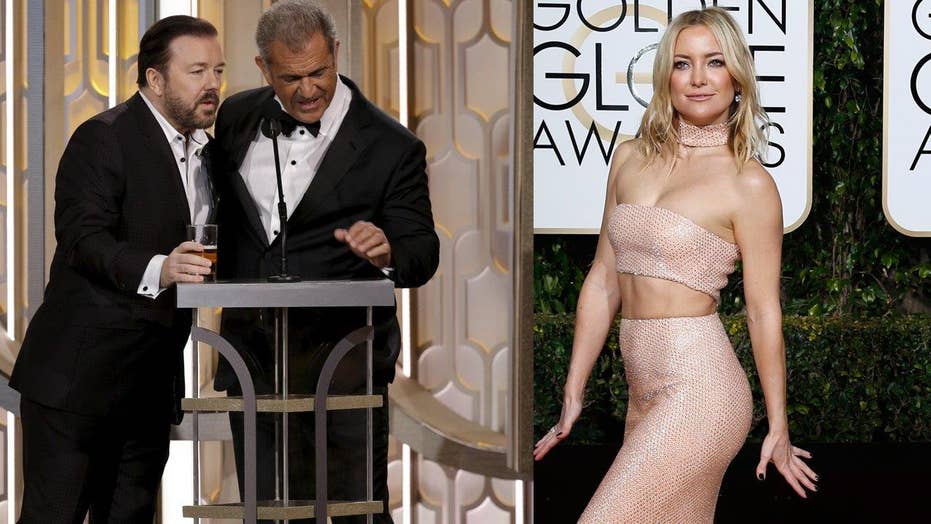 Four4Four Golden Globes special: Did Ricky Gervais go too far with Mel Gibson? What was the best jab of the night? What happened to Matt Lauer? Who was the best dressed?

Mel Gibson and Ricky Gervais were turning old jokes into new laughs at the Golden Globes.

Gervais had made jokes at Gibson's expense during one of his previous stints hosting the Golden Globes, and on Sunday he found himself introducing the embattled Oscar winner, who was at the award show to present a clip from the film "Mad Max: Fury Road."

"I’m in the awkward position of having to introduce him again," Gervais said. "Listen, I’m sure it’s embarrassing for both of us. I blame NBC for this terrible situation. Mel blames … we know who Mel blames."

That didn't stop him from continuing to crack jokes at Gibson's expense.

The host didn't stop there, saying he would rather drink with Gibson than with Bill Cosby.

"Mel’s forgotten all about it apparently; that’s what drinking does," Gervais cracked. "I want to say something nice about Mel before he comes out. So, I’d rather have a drink with him in his hotel room tonight than with Bill Cosby."

Gibson took the ribbing with good humor and gave it back to Gervais.

"I like seeing Ricky once every three years. It reminds me to get a colonoscopy," Gibson fired back. The camera panned to an incredibly shocked Alan Cummings.

Gervais then approached Gibson and asked him a question that was entirely bleeped out by NBC.

The question was a reference Gibson's anti-Semitic rant after he was arrested for drunk driving in 2006.